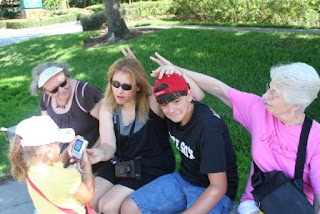 On Sunday, we went to Animal Kingdom! It's like a zoo with rides and shows. Because of the way our hotel shuttle operated, we had to take the shuttle to Epcot before embarking onto any other destination. Once at Epcot, we boarded the Disney bus for Animal Kingdom! 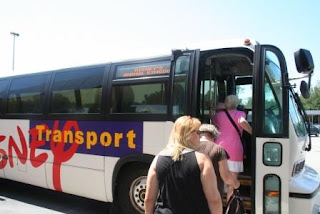 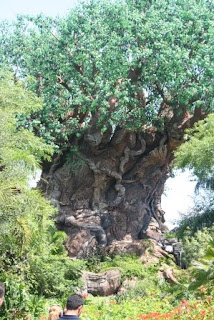 Once inside, we were greeted with the "Tree of Life," which is bigger than I ever imagined. The animals carved into it are very detailed, and picked out the animals was a lot of fun, too!

The first thing we did was take the Safari ride. It was already hot by late morning, and that made you feel like you really were in Africa! The line for the Safari was long, but the FastPass was during a time that was only about an hour later than when we were there, so we figured it was worth waiting in line. In retrospect, if we get to go back to Disney again someday, it seems like it is almost ALWAYS worth getting the FastPass, if only to go do a couple things that might help keep you out of the heat until it is time for your ride! :-) 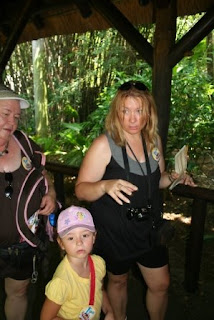 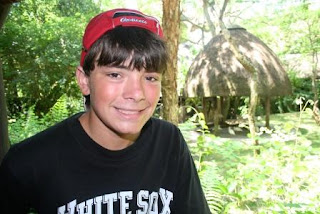 We saw elephants, lions, hippos, giraffes, and all kinds of other animals during the journey. Shan said it was the "must do" ride at Animal Kingdom, and I agree completely! Yes, it's hot and humid, but having the animals come up to the vehicle (or be within just a few feet of it) is unlike anything I have ever done. The kids loved it! 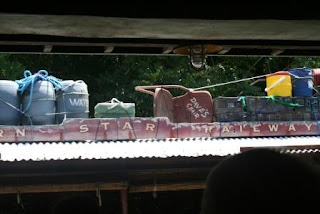 We took the train over to the petting zoo area. I was glad to know I had my own chair, ready and packed! (You may have to look closely at the photo of the top of the train). The "Affection Section" (as it is called) had goats, a cow, donkeys, and a few other animals the kids (or young at heart) could pet. Honestly, it was a lot like being at home, since we've got most of those same animals running around here! LOL!! 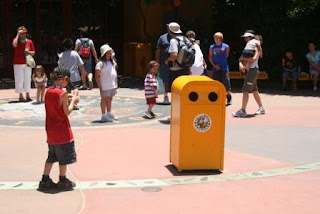 There was a robotic trash can that followed people around and talked to them. It was very cute, and it would thank people for putting items into the can, or just pester the heck of the passersby! It chased a couple kids around the area, and everyone had fun watching. 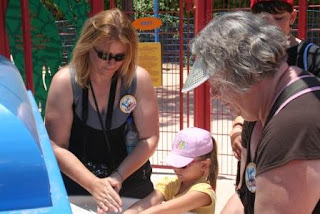 After we were done petting the animals, we had to wash up!

We walked around, taking in the sights and sounds of Animal Kingdom. I decided I just had to go on the Everest roller coaster! That was awesome! The thing would go for a bit, stop, back up, then rocket you forward again on a different path. At one point, we were pulled backwards down a different path into a deep dark tunnel! While I rode, everyone else waited and took some pictures. Amazingly, when they took this picture: 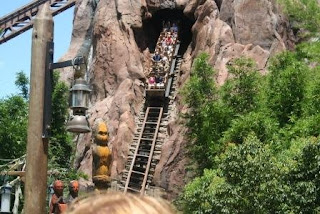 They had no idea that I was actually on that same coaster!! We only discovered that after we got back to the hotel and I was zooming in, playing around (I'm in the grey shirt, next to the girl in blue and white with her arms up): 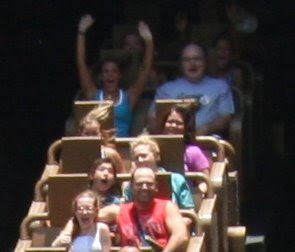 If you go to Animal Kingdom, you have GOT ride Everest!

We watched several shows, including a stage show presentation of "Nemo." Tyler and I also rode "Dinosaur" which put you in a car-like ride and drove you 'back in time' through a dino-filled world. Many of the rides at Disney are not really coasters and not really 'ride-alongs' but some kind of mix between them. If the ride says "Do not ride if you get motion sickness," they are not kidding. Well, for the most part, anyway. A lot of the rides do have rockin and rollin motion, but I think everyone except for the very weakest of stomachs can handle the rides... Then again, I don't get motion sickness, so that's easy for me to say, right? :-) 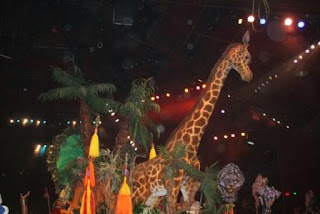 We attempted to see "The Lion King," but part way into the show, they had a mechanical failure and had to cancel the show. When the announcer came on and said they were sorry, but the show would be cancelled, everyone just sat there for a minute (even the actors). We thought it was a joke, or part of the show, but soon the lights came up and we were escorted out. Evidently, characters were supposed to come out of a trap door in (or near) the giraffe float, and they couldn't get the door opened up. We were seriously bummed out...

So, we went back to the hotel and went swimming instead!