The Colts took the firery Bears and kicked them in the head a few times with their horseshoes. For the most part, I enjoyed the game. This was one of those years that I really didn't care who won or lost, so i just enjoyed watching football. Of course, I looked forward to the commercials. And, since we have DirecTV, we did NOT see all of the SuperBowl commercials. After seeing all the commercials online, I felt robbed that DirecTV has whatever airing rights that allow them to put their own commercials into the programming. Usually, I don't care what they show, but when it is the "big game" and part of the fun is watching the new kooky commercials, that's another story... Nothing I can do about it, though, so no sense in whining!

Speaking of, "super bowls," it turns out that February 5, 1991, is the date that Dan Fain received a patent on his own "super" bowl... A Flushable Vehicle Spittoon... Yes, you read that correctly... This invention connects to the vehicle's window washer system, such that when you hit the washer fluid button, it also send fluid into the spittoon for cleansing - which runs through a tube out of the bottom of the vehicle. Here is more info, and you can check out the picture below: 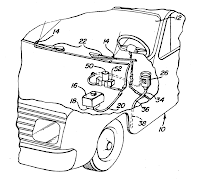 Well, Dad made it to Iraq! He is at/in Camp Hope. There were a lot of personal security measures he and the others that went had to take, but they got there without incident. I don't know what I'm "allowed" to say or not say, should Uncle Sam be reading my blog, but he said it wasn't as bad as some of the other folks had made it out to be - and by "bad," I mean it wasn't the harrowing flight into Baghdad that he had been told it would be. As for the actual experience of being driven to the camp, surrounded by security vehicles, he said it was like nothing he had experienced before. There is a LOT of protection where they are stationed, and he has his own 'suite' for lack of a better word. There is a room and bathroom, I'm thinking like a hotel room, maybe.. See what happens when you leave it to me to give you details? :-)