We watched the Oscars last night. I thought Ellen Degeneres actually did a pretty good job of hosting. She is just quirky enough that even when her joke is falling flat, it still comes off as a funny situation.

In my opinion, the best acceptance speech was Jennifer Hudson's. To me, watching someone new and fresh to the whole experience win an award is what it is all about. She stuttered, had to stop and catch her breath as tears brimmed in her eyes. The shock of winning, the awe of being in front of so many people, themselves stars, was almost too much for her, but she gained (or kept) her composure enough to show the true sophisticated woman she is growing into. It was fantastic!

Martin Scorsese FINALLY won an Oscar! And, for as long as he has been in the business, and how well-known and respected he is, he still gave the same kind of 'choked-up' speech as Hudson. To see the man finally win brought the same feeling of joy that I felt for Hudson.

Winning awards is not why actors, directors, writers, sound folks, etc do their jobs day in and day out. They would still act, direct, write even without accolades and confirmations. But, to be honored, to be recognized as the best in your field, whether one is brand-new or an old-hand let's the recipient know that their work does not go unnoticed, unappreciated.... Everyone deserves (and sometimes needs) a pat on the back that says, "Great job!" 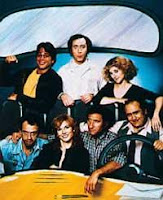 I used to say that I knew I was overdue for a haircut when I looked like Rev. Jim (Christopher Lloyd) from "TAXI" or when my shadow made me look like Jack Nicholson... After last night, I can't say that anymore - or at least not yet... Jack had his head shaved to a shiny, glistening orb... Wonder if he's making a KOJAK movie... :-) Hmm...