I have no idea

Seriously, I have no idea where this post is going. You're welcome to come along for the ride. 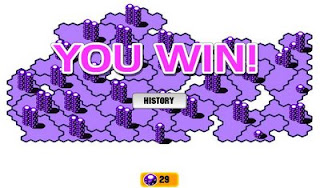 It's like Risk, but everything is determined by rolls of dice. Yeah, it's dorky, but it's fun anyway. Or maybe challenging is the better word. In any case, it's my latest Internet Attention Deficit Disorder manifestation.

My other Internet-based distraction lately is woot.com. Woot has one item for sale each day, and once they run out, it's over. You have to check in early or else miss out on most things. Sometimes they have cool things and other days they have junk no one wanted to begin with. It's always worth stopping by, if you can remember to do so. Of course, if I really cared that much, it would be one of my home page tabs, right?

There's a new computer store in town here. I haven't been to it as of yet, mainly because it looks like it's not really open for business. It is, of course, but it looks like the same run-down shop that was there before. And, there is something else... The shop has a bay window, and in the bay window is a mattress. Seriously. I'm not sure I feel comfortable going into a store that has a mattress in the front window. There's just something not right there. It'll be interesting to see how the store lasts. Prescott has maybe 4300 people total. Hope has at least twice that many and every computer shop to pop up there has failed except one that I can think of. It's a tough market to crack because you have to have enough business to pay the rent and pay your own bills, buy food, etc. As much as I would love to open my shop, I just don't see it being feasible. Then again, I have been wrong about such things many times before.

Wow, hey! The Indians won tonight! If you have not been following along with what the Tribe has been up to this season, well, they are in dead last place in the American League. It's a lot like watching the Indians of the 80's. Maybe they'll remake "Major League" and give the Indians a boost.... Oh well, at least we're not the Washington Nationals...

Do 'stickers' grow in places other than the South? There is this thorny grass (probably what's called 'crab grass') that releases these little roundish hard 'stickers' that get on and in everything, and when you step on one with your bare foot, you might as well call the roofer because you are going through! Talk about pain! Well, our vacuum cleaner got quite a workout today. You know you feel good about your carpet when you can walk across it with bare feet and not worry about stepping on stickers. Man, I hate those things.

I am having one heck of a baseball-related year this year! We went to the Rangers game for my birthday, then in a couple weeks, I am going to the Indians-Cubs game in Chicago at Wrigley, and a couple weeks after that, we will be in NYC for the Yankees game! Talk about FRIGGIN AWESOME!!

Speaking of awesome, how about those Penguins!? 6-2 tonight!? Whoa buddy! Malkin is on fire, and Crosby is not far behind him. Holy cow! It would be awesome to have the Penguins take the Stanley Cup in the same year the Steelers got the Super Bowl! I don't see any way the Pirates could grab the World Series. I guess anything could happen. I would love to see an Indians-Pirates World Series. That would be cool... Maybe someday in my lifetime...

We've been watching the Super Regionals NCAA Women's Softball on and off during the weekend. Man, there have been some very good games! I am not necessarily a softball fan, but these girls can really rip the ball and play some amazing defense! If you're not watching, you should try and check 'em out.

I'm sick of hearing about Brett Favre. I just wish he would have retired the first time he said he was. He would have gone out at the top of things and not looked like the aging buffoon his circus has turned into. I hope all athletes are watching and paying attention because he is giving a clinic on how NOT to retire from a professional sports career.

Thanks for stopping by during your Memorial Day weekend! Be sure to take a moment or two and remember just why we celebrate this holiday to begin with... There are men and women who have given their lives so that we can do things like blog, keep up with friends on FaceBook, go to church where we want, play outside... Thank you, servicemen and service women! Your sacrifice is appreciated here each and every single day I wake up as free American.
on May 23, 2009