I've been talking for a while now about a 'chaperoning' job. Well, this past Friday, it was time for the job to come to life. The Prescott Middle School students who earned enough reading points were rewarded with a free ticket to see the Arkansas Travelers play some ball. For many years, the Travs were the farm team for the Cardinals. At some point in the recent past, though, they became the team for the Anaheim Angels. 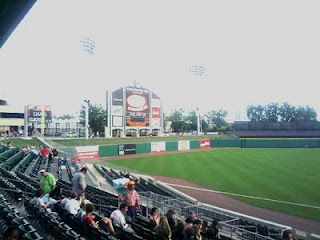 These pictures were taken at twilight with my camera phone and then I edited the picture a little to try and bring things into a better view. Unfortunately, what you can't really see is the great view of downtown Little Rock. Ah, well... 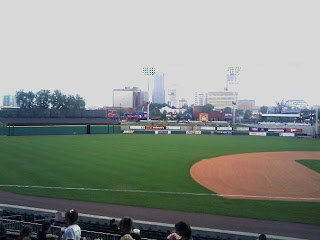 There were several chaperones that went, and this was the first time I had ever served in that role for something like this. Maybe it's just me, but I always thought the job of a chaperone was to watch the students to make sure they weren't causing trouble and that they weren't wandering all over the place aimlessly. Evidently, I was wrong. For the most part, the kids behaved themselves well. We are talking about three busloads of 5th-8th graders.

Basically, the kids were given tickets to seats in one section, but were told (by the Principal) that they could sit anywhere in that section. The usher was not happy with this arrangement because other ticket-holders would be coming and might want to to sit in their assigned seats. We compromised and made the kids move if a spectator wanted their assigned seat. We only had one couple that threw a fit over the way things were going, and that was mainly because a couple kids threw ice at some other kids, and the couple got caught in the crossfire. None of the adults caught the exchange, but we caught the flack for the aftermath. And, this is where my issue comes into play.

We had at least three adults per bus. There is no reason we should have missed that action. Two girls got into a little bit of a tiff at the beginning of the game, but aside from those two incidents, things went pretty well. I didn't like the kids being allowed to wander around the stadium freely (granted, it's not a very big stadium), but they mainly wanted to check out the food and the souvenir shops.

We all had a good time, but I don't think I could chaperone again. I was never born to be a teacher who has to deal with kids all day, and this just solidified that in my mind. If I ever get the chance to go along with my own kids to an outing, I'll be happy to, and I will keep my eyes on them and on the kids that I know personally (or their parents ask me to keep an eye on them), but not a 'blanket babysitting' again. I was too worried about losing a child. That's one thing when you're looking out for 2, 3, or 5 kids... A whole other when it's 50...

The kicker is that once this all passes, we'll be hit with 100+ degree weather and will be praying for rain. It's something of a catch-22. As I type this, however, the downpour has given away to actual sunshine.

Happy Mother's Day to all the mothers out there! My Mom's TV has been acting up for a while, so I told her that I would go halfsies on a new one. She has a very nice, expensive entertainment center that was designed for a 32-inch standard television. So, I measured the height and width and went shopping. Turns out, Shan and I found a 32-inch flat screen that would fit perfectly. So, she has the same screen size, but instead of being square, she now has a widescreen! She said she likes it so much better - I think mainly because she can actually SEE things on this one.

The kids told me what to get Shan, and I couldn't find exactly what they wanted. So, I did the best I could. I am not very good at these kinds of things, as I have stated many times. They got her a bracelet with crosses and pink hearts and a necklace with a heart and "MOM" scripted across the middle.