I got to work today, and had a meeting with my Director first thing. Since we are breaking ground for the new building next week, the three guys that work at our education service center (yes, only three guys in thee whole place), we were tasked with different things to do for the big day.

Ultimately, we're all going to paint shovels (so far as i understand) and I am printing out various logos to go on the hardhats we bought for the ceremony. I told my boss that we should wear our T-Shirts. She said, "What shirts?" i said, "You know, the ones that say EXTREME MAKEOVER: CO-OP EDITION!" Well, I thought it was funny anyway...

After that meeting, i had a meeting/presentation in Little Rock. On the way there, I managed to take a couple of pictures. Nothing spectacular, but still: 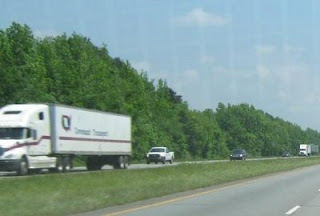 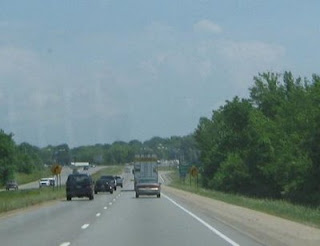 And as I got close to Little Rock, I spotted a Dodge Challenger in the used-car lot: 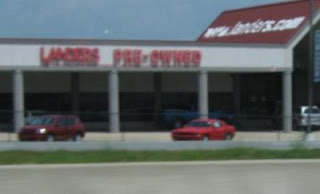 Man, I would love to have one if they didn't cost so much!

The meeting was NOT what I thought it was going to be. It turned out to be more for managers and administrators of various government agencies than anything. There were a few of us tech folks there and after the first presentation, we sat there kind of scratching our heads. The first one was great in the sense that it talked about what managers need to do to get into the 21st century. How they need to learn how to incorporate FaceBook, Twitter, wikis and blogs into the organizational environment, and lead the way rather than play 'catch-up' or put up roadblocks and stop signs. I took a lot of notes during that one. It had information that applies to anyone who might be in a managerial position one day as well as those already in one.

The second presentation was sort of about IT, but it was more about corporate culture and developing innovations for development and such. We were scratching our heads on that one. Then, the last two really did not apply to K12 at all, but rather state agencies and manging personnel. We were pretty well through by the end of it all. In my opinion, though, any time you can get quite a few "A-HA!" moments (no, not the 80's group, though that would have kept our attention), it makes it all worth it.

Tonight, I am staying at a hotel in Little Rock, after having a personal pizza from the Pizza hut Express in Target and a salted soft pretzel to go with it. :-) Admittedly, it was not as good as the ones Shan and I had in arlington, nor as good as the one we had at the mall in Texarkana.

Friday, I will be helping out with a group of teachers participating in the Technology Infused Education program that was developed by the education service center where I work. I've talked about it before, but you can check things out at the TIE Portal.

Friday night, I'll be chaperoning Tyler and a bunch of 8th graders! It should be a lot of fun! As I said the other day, I'll talk more about THAT later...

OH, I almost forgot!! The car below was sitting in a parking lot: 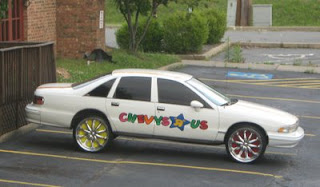 There are a *LOT* of Caprice cars that are done up with skittles, Mt. Dew, Fruit Loops, you name it, around here. Is this a national thing, or just an Arkansas thing??
on May 07, 2009