Penguins get spanked, we get a new mattress 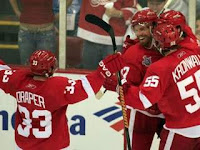 Game 1 of the Stanley Cup finals come to a very, very bitter end for Penguins fans. How many of the 13,000 fans at Mellon arena stuck around after the first goal? I would say all of them. And, how many stayed after the 2nd goal? Most, I'm sure. And, the 3rd? By then, I would venture that many left the building. And by the time the 4th goal was scored with less than 20 seconds to go in the game, my guess is that Mellon arena was all but empty. Red Wings kick Pittsburgh's butt: 4-0 Hopefully, we will regroup!

We bought a new mattress today (well, yesterday but picked it up today). It is an ultra-firm Blue Granite Sealy. It feels great and we are no longer being sucked into the center of the bed like some weird nocturnal black hole! In fact, after we put it in this afternoon, I laid down to 'test' it and ended up taking a two-hour nap! LOL!