Maybe it's just me, but I think Microsoft might want to re-think the whole "Internet Ad" thing when it's own sites can't even target ads properly: 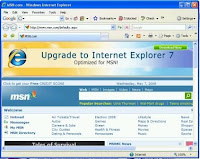 "Deal or No Deal" aired an episode on Wednesday (May 7) that featured Elaine Primeaux from Texarkana. Elaine is the woman that Shan and the kids (and a lot of other folks) used for their hair stylist for years! She has/had a shop in Hope, AR and her husband is a chiropractor in Hope. It was really cool to see someone we all know and talked to often star on TV! She walked away with $40,000 for her birthday, plus a free trip to Estonia. Hard to beat that! :-)

Thank goodness the American Idol voters realized what a horrid, horrid job Jason did the other night and booted him off the show. Hopefully he will get his stuff together for the tour! 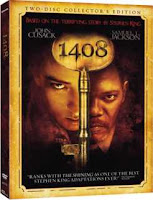 On Tuesday, I ordered the "Collector's Edition" of the movie "1408" from Amazon. I was surprised when it showed up yesterday (Wednesday) even though I did not pay for 1-day shipping! Excellent response.

So, after everyone else went to bed, I popped the DVD into the player and let it ride. I guess this is my "review" of the movie, for lack of a better word...

First of all, I love the written/audio version of "1408." I know, that means I am biased, and unashamedly so. So, when they invented a new beginning for the movie, I was already setting myself up for a disappointment. And then, they moved lines from the story around, even having the wrong characters say them. This was not going well. On top of that, I had taken what I had come to know about the different characters and my mind's eye differed greatly from what I saw on my television. I don't mind Samuel Jackson playing Olin (even though the story makes it plain that Olin was a round man with pudgy hands, but whatever). But, he didn't CONVINCE me that he was the same person from the story. But, for the sake of watching the movie, I let it go.

Some of the initial conversation was in the movie, but it was mangled. It was like knowing a favorite recipe and watching someone else make it, trying to 'interpret' what you had grown up with. Some of the familiar was there, but it still missed parts that you had held dear ("This isn't my mother's 1408..."). And why did they change how the first guy dies? He was the first to jump out the window (which they DO show later, even though that is not how they told the story in the office!). And, "My brother was eaten by wolves on the Connecticut highway..." That is a classic, wonderful line from the story that is so out of place typed out in the scrapbook of death in the movie. What a waste.

Creative license. There was a lot of it. I would love to see if Stephen King feels about 1408 the way he did about the first "Shining" movie - that is, from various sources - that he hated the Jack Nicholson-starring version. I wonder if he hates this version, too.

Now, putting all of my dislikes aside, this was a GREAT psychological thriller. It had the occasional "boogey-man" jump out at you to scare you a little, but the real stars of the movie are John Cusack and the room itself. The director sets up his audience perfectly with a "nothing's wrong in this room" start and sucks the viewer into a world that is really, really weird. One of my biggest fears was the incorporation of the little girl. She is not in the written story, but that whole 'plot line' was done very well. I even felt heartsick when she died in his arms, and the anguish he felt. The voice on the phone was a nice touch. At first, I wanted it to be the rasping voice from the audiobook, but the wonderfully pleasant voice worked more effectively as she delivered lines that seemed so out of place in a 'normal' hotel room. I admit, I hated the pictures on the wall. Why not use the same ones from the original story? Oh well, they still managed to incorporate parts in there anyway. Why change the titles of his books? Why bother staying in a hotel at all if he had already written the '10 haunted hotels' book?? That made no sense (in the written story, he is currently writing the hotels book).

I loved the use of the mini-corder and how Enslin would stop it and start it again, like in the story but differently. Cusack spends the bulk of the movie being the only "main" character on screen, battling his mind and the room, and he pulls off an excellent job of it.

I watched the extras - deleted scenes, etc. And, I have to say that the deleted scenes really added nothing to the movie. In fact, cutting parts of the scenes (like where Olin shows up at the Post Office) made things actually more suspenseful without giving things away. They should have cut out the "Burn Me Alive" on the brick wall. That was a dead (pardon the pun) give-away. The first time I saw it, I knew what was going to get Mike Enslin out of that room.

I have not watched the 'alternate ending' version yet. I hope it is better than the theatrical ending. The point of the whole thing (or one of the points) was that the recorder did NOT record enough to make things make sense. When he plays it back, and his daughter's voice is on there, I literally groaned out loud. How disappointing.... As an adaptation of a short story, I thought it missed by a country mile. As a movie thriller, though, it hit spot on....
on May 08, 2008