"I don't know why someone laughing out of control should be more frightening than someone sobbing, but it is..."
- Stephen King in the written version of the short story, 1408.

That is one of my favorite lines from what is probably one of the top-10 (ironically - read the story and you understand why I say "ironically") horror stories ever, or at least in short fiction.

I have yet to see the movie, though. Part of me desperately wants to see it. But, part of me doesn't. Not because I think it would be scary, but just the opposite - it wouldn't be scary enough. Besides, I heard they added some little girl to the story and that just ruins it for me. The whole thing is supposed to be about that room, "that goddamned room" (as Olin would say), and Mike Enslin's encounter with the room itself. I will see the movie, of course. In time... Though, I have digressed from my original topic. 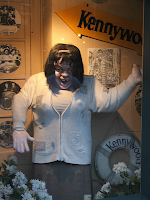 Have you ever known or seen someone laughing hysterically for longer than "normal?" When I was a kid, there was this mechanical woman in the ticket booth to the train ride at Kennywood amusement park. She was roly-poly with a huge, gaping grin. When you first looked at her, her eyes seemed to smile. She was jolly. But she laughed continuously. The hydraulics hidden inside her caused the thing to rock back and forth as in great fits of laughter. If you watched for too long, her eyes no longer smiled at you. Her laughter became maniacal. She scared the crap out of me.
(Note: After I typed this, I found the picture of her. Funny how she seemed MUCH fatter when I was a child, not to mention she looks much more demonic than I remember. I found the picture on Flickr under the heading, "I hate this thing." Says a lot, doesn't it? There is a YouTube video of one at Fisherman's Wharf that is more along the lines of what I was thinking... Here is the link: http://www.youtube.com/watch?v=zq3Lnx1JMy4

When someone cries uncontrollably, one can empathize, perhaps sympathize. We assume, perhaps, that there is great tragedy or loss which has caused the pain through which the only outlet is sobbing beyond control.

When someone laughs uncontrollably, however, things take on a much more sinister feel. When expressed to extreme, it would seem that joy becomes menace. I remember sitting at my Grandmother's dining room table (this would be my father's mother), and for no reason I could think of, I started laughing. I'm sure it started as something mundane - perhaps my brother and I were told to keep quiet, which of course would only lead to trying to make the other person make SOME kind of sound. I started giggling. The harder I fought it, the worse it got. Soon, I was laughing out of control with no "reason" I could think of. My parents were not happy with me, and in fact and asked, demanded, that I quit "being so silly." But, I could not. Soon, I was crying as the laughter poured from my lungs - tears streamed down my face but I was still laughing. I was excused from the table. Only when I made it to the bathroom did I finally quit laughing, though I bawled for quite sometime afterward. Not because I had gotten into trouble, but because I could not make myself quit laughing, and it scared the hell out of me.

So far as I know, I have never had another such fit, and only once can I recall a time when I was screaming uncontrollably (which I may have written about here already).

1408 (which I first heard after I received a copy of King's "Blood and Smoke" audiobook several years ago) brought all of those memories back to me. I have not written about them until now, not even in my own short fiction stories. I suppose I will one day incorporate uncontrolled laughter into a story at some point, though. After all, if it is something I've thought about, there is a good chance that uncontrolled laughter scares the hell out of certain other readers, too.
on May 02, 2008