Happy Mother's Day to all the mothers out there who happen along to my site! We had a good MD here at "the ranch" for sure. Shan and I watched "27 Dresses" while the kiddos were shopping in Hope with Shan's Mom.

This was cute "chick flick" with a pretty predictable ending, but that's okay, it's what women want (pardon the additional chick-flick reference there). I don't recall any breakdown sad moments, and there a few laugh out loud scenes (the one where she is modeling the dresses is funny). The scene where she and her boss kiss reminds me of a scene from Grey's Anatomy, I think... Then again, I may be suffering a bout of 'senior moment.' It's a cute date-night movie, well worth the popcorn and Milk Duds. :-)

My Mom has entered the world of blogging! Her blog is called "Surviving a loss" and you can get there from here: http://darlene-survivingaloss.blogspot.com/. Feel free to offer tips, advice, suggestions, or your own story to her. 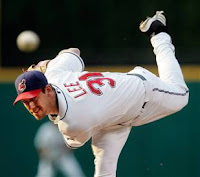 So, how about this? Cliff Lee, Indians pitcher, is from Benton, Arkansas!? At work one day, John said something about an Indians pitcher being from Arkansas. I am an Indians fan, for sure. But, I do not generally follow the players' personal lives. But when John said that Cliff Lee was from Benton, my ears perked up a bit. Benton is not too far from where I live, maybe an hour or so. That is pretty cool! Maybe in the off-season, I'll see if I can do an interview with him for my Indians blog. I'll keep you posted. 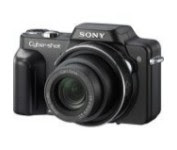 For Mother's Day, the kids and I bought Shan a new digital camera - the Sony DSC-H10/B (8.1 Megapixels with a 10x zoom). This camera is SMOKIN! It has some super stabilization technology that manages to grab some seriously sharp images, even when you are moving the camera. The only time I "tricked" the camera was when I put it 'burst mode' (take pictures repeatedly as long as I hold the shutter button) and panned the camera across the room very quickly. Other than that, you can raise the camera, hit the button, and get a great shot even if you haven't exactly steadied yourself yet. The reaction time is great too. I snapped one shot that my Mom walked in front of, but the picture snapped just before she enetered the frame, even though we were sure it would have her blocking the shot! Nope. Great stuff, and we have barely scratched the surface.

Shan and I decided that it would serve as our anniversary present (we had already been looking at digi-cams) as well. If you're looking for a new camera with GREAT zoom (man, 10x is awesome, plus you can buy additional lenses for it!), I say snag the DSC-H10 on sale! (the "/b" on ours means it has a black body instead of silver).

Have you been watching your grocery store aisles like good boys and girls? Remember, look for things that have been put back on the wrong shelf because (presumably) someone wanted something else! We have seen baby clothes next to cookies and other such fun swaps. Though, I have noticed that people do not seem to put things in the coolers or freezers. I mean, I have never seen diapers in the ice cream freezer... I may have to do some more research... :-)