This will really be all over the place. A lot can happen in a couple days between posts! (Do you know the movie I got the quote from?) 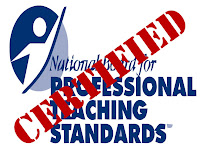 CONGRATULATIONS TO SHAN!! Shan is officially a National Board Certified Teacher!! She got the word (logged in and saw her scores) on Friday morning! We are so proud of her and we know how much hard work she put into it!! WAHOO!! :-)

Tyler upgraded my phone today. He was able to get a RAZR for FREE as an upgrade to the phone I already had. It is a very cool phone indeed! :-) He has some things he must do in order to keep up his end of the bargain or the phone returns to my possession. Shan said I am like the vulture, just waiting.... LOL, not quite... But, close!! :-) Just kidding people, I hope he does keep his responsibilities up, that's what's important. 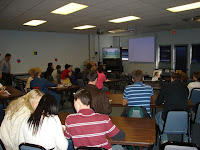 Thursday's Megaconference IX was very successful considering it was the first time we have done anything like that. At 6:45am, my office connected with the other sites in Arkansas who were joining in, and then at about 7:00am, the rest of the world (literally) came on board. There were presentations from India, China, Slovenia (who had students sing a couple songs including "Amazing Grace"), Pakistan, England, and all over the U.S. In addition, there were sites from about 150 other places around the world and another 50+ from the U.S. that all watched along.

At roughly 9:30am CST, a group of students from Texarkana came in and watched at a video of Chinese dancers played on the screen. Around 10:00am, a group of students from Geno Central (near Texarkana) came in just in time to catch the end of the Chinese dance and watch the program switch to folks from Egypt present a very cool update on an excavation project they have going on in the middle of one of the towns! VERY cool!

Shortly after that, we had the first of three world-wide roll calls. We were about 25th in line, so we watched as sites from around the globe chimed in to say "hi." As we watched, the students in the room started talking about how they wanted to "sign in" on the roll call. So, when it came our turn, I announced who we were and that we were in Hope, AR, birthplace of former President Clinton, and thanked the folks at Mega-con for letting us join. As soon as I stopped talking, all the kids in the room shouted out in one voice: "YEE-HAW!!" Everyone laughed, and it was VERY cool! :-)

The students stayed for 1 or 2 more presentations, then they had to get to lunch and return to school. All tolled, we had about 25 or so students. I remained in the room for much of the day, but we had no other visitors until late that evening.

Around 5:30pm or so, Shan brought Emily and Tyler, and we watched a live performance from China in which a group of about 30 or so people performed some kind of Tai Chi exercise. It was very cool and the kids were amazed. Tyler wanted to ask questions, but he didn't get a chance - maybe next year! Or maybe in February, I should say...

In Feb, there is a "Mega-con Jr" that is aimed specifically at elementary and jr/sr high school students from around the world, and you can bet we will be taking part in that one for sure! :-)

Just for grins, let me give you a run-down of Friday:

As Tyler and I headed for my truck so that I could take Tyler to school, I noticed that Daisy was not at her feeding trough. I put food in it and called to her, but she did not come. I knew that was not good.

I take Tyler to school and head for the next town, Emmet, because they were having trouble with their videoconferencing connection. When I get there, everything is working fine, so I tell the facilitator that I will be back after I run back to Prescott.

I drive back to Prescott. On the way, Shan calls to let me know she saw her scores and that she was National Board Certified!! Awesome!!

I get to the house and call for Daisy, but no response. I hop the fence and start searching. We have woods behind our house, so I start at one end of the woods, and walk along the treeline calling for the horse. As I get near the end of line (before I'd have to go into the woods), I hear Daisy snort at me.

The woods are overrun with these thorny (I call them jaggers, since I am from the 'Burgh and all) vines that I have to claw and scratch my way through (actually, the vines did the scratching - lots of scratching!). Eventually, I find Daisy wrapped in and among the thorny vines.

I try using my hands to free her, but I am getting ripped to shreds, which is not helping either of us. I leave her and head for Shan's Dad's shed for something that will cut through. I did not find the machete, so I settle for a brush-blade. I have no idea if that is what it is really called, but I have used to clear brush in the past, so that's what I'm calling it!

I find a place that is about as directly in front of Daisy as I can get, and I start whacking and hacking at the brush, the vines, anything in my way. All the while, as I hack and slash, these long vines pull and poke and prod at me from every direction.

Finally, I clear a path to Daisy and do my best to free her from her entangled state. When I turn around, I realize that I had hacked my way through in such a manner that only a PERSON who was HUNCHED over could possibly get through. So, I hack away without bending over, and finally make a semi-cleared path.

Daisy is not moving, and when I call her to come out, she looks at me like I am either from another planet or I am completely insane, or most likely both. I grab her halter and pull. She has other ideas, and somewhere I am pretty sure I hear my arm being ripped out the shoulder socket. This does two things: 1) Helps me understand that she is not a willing participant in this endeavor, and 2) That I am in no mood to be playing games.

I grab her again, and this time, I pull her forward. She takes a step and her foot is caught in a mess on the ground. With a deep sigh, I bend over and lift her front leg out of the mess and forward passed it.

Grabbing her halter again, I pull and she goes no where. I've had enough. At this point, I truly do not care if she runs me over, so I pull and let her know that in no uncertain terms, she is coming with me. I don't know if it was the tome of my voice, the blood running down my arms, or the fact that I was taking her head with me even if she opted to leave the rest of her body behind, but she came with me.

Once free of the trees and jaggers, she "jogged" up to her trough and began eating like the ordeal had no bearing on her life whatsoever. Little snot! I checked her out to make sure she was not cut or bleeding, and she was not. She was skittish for sure, but I figured that was normal given what had happened and that I had "coaxed" her out of there.

I went in and got myself as cleaned up as I could, then headed to Shan's school.

I stopped in to see Shan and congratulate her and we got to talk for a little bit (I told her the horse story in order to calm her down - I think she had a mild panic attack when she saw my arms). From there, I went back to Emmet, and they were down again. After a few phone calls, the problem is something related to the telephone company. I wish I could tell more specifics, but when I talk to Max in Little Rock, he gets very excited about troubleshooting things and he begins to spout terms and protocols and who knows what else, and I get totally lost... So, in the end, I walk away with "It's a telco issue, then Max?" And, much to his dismay that I have boiled the entire conversation down to such simple terms, he replies, "Yes, Dave, it's a telco issue." :-)

After leaving Emmet, I drove to work, calling the florist on the way to send Shan some flowers and balloons. The rest of the day was mostly spent cleaning up the conference room from the Megaconference and explaining to people why it looked like I had just finished filming a scene from Saw...

Of course, things are always worse when you get home, get cleaned up, and take a long look at yourself after such an event (getting ripped to shreds, that is). I have cuts, nicks, scratches, bruises, etc from head to toe. In fact, Emily took great pleasure in letting me know I had a scratch on my bald head... Aren't kids just wonderful? :-)

There's probably more that I am missing, but right now, it's 10:45pm on Saturday night, I am going to the living room to chill out with Shan and Em on the couch.