Popped in My Head

For whatever reason, the Lexmark X2500 multi-function printer we have has been the cause of delays during startup on my home computer. You turn on the computer, it boots, and then you can't do Internet or Email, etc until the stupid little "Lexmark Imaging Studio" icon appears - sometimes nearly two full minutes after you get the desktop. I finally poked around in the services portion of Windows XP enough to narrow the problem down to one service called xldd_device. Now, in my experience, it took me all of half a blink to connect that name with the Lexmark. So, I disabled that service, rebooted and TAH-DAH, the computer came up lickety-split. Problem? By disabling that service, I no longer had access to the printer/scanner/etc! Fooey.

Search around the Internet got me nowhere fast. Evidently, it is a common problem, but the "fix" was nowhere to be seen. Then, I started poking around the registry - dangerous, sure, but what the hey. Here is where I found the mention of my errant service:

I knew that deleting it would do no good, because then I would not have access to the device. So, I went for the next thing I could think of: RENAME that service. No, I have no idea why I thought that would work, other than this: If services are activated in alphabetic order, then renaming it to zzxldd_device should prolong the "delay" until after all the other services have started. So, in theory, the computer would up and running before that goofy process took over, and maybe I could "head off" the delay.

Well, it works! Sorta. The computer boots up quickly, and the process runs so I have access to the scanner/printer. But, that service now runs BEFORE nearly every other "system tray" process. How weird is that? Oh well, it works, and I'm happy.

Now, if I could only get my DVD burner to cooperate...

At Wal-Mart the other night, Shan bought me a red T-Shirt that looks like a Santa Suit. In the upper left corner, it reads, "Does this suit make me look fat?" I wore it today to hang out in. It's very cute! :-) And, yes, it does make me look fat... Well, that's my story, anyway... :-)

Emily and I played with her off-brand Lincoln Logs for almost two hours tonight. We built, we tore down, we huffed and puffed. Somewhere in my parenting, I learned to let kids imagine whatever they wish to, and as long as it is appropriate, to go along with it. So, our little logs were animals, people, blocks, cars, and more. At one point, she had put two small ones together and said they were a wheelbarrow! To me, it looks like a cannon, but hey, I'll take the barrow any day. :-) We also used several to create a see-saw. Talk about some creative engineering!

Was sent this quiz: (my answers in italics)
1. Wrapping paper or gift bags? Wrapping Paper (I'm a good wrapper for a white guy)
2. Real tree or artificial? Artifical (RealTree is for hunting)
3. When do you put up the tree? Day after Thanksgiving (I'm feelin fat and jolly after all the food, so what better time!?)
4. When do you take the tree down? After New Year's (Party's over, break it down)
5. Do you like eggnog? Uhhh... No.
6. Favorite gift received as a child? My mother requires that I answer "Planet of the Apes Treehouse"
7. have a nativity scene? Yes - Actually, several
8. Hardest person to buy for? Everyone - I suck at gifting
9. Easiest person to buy for? Myself - I know what I want.. LOL
10. Worst Christmas gift you ever received? Can't think of anything
11. Mail or email Christmas cards? I think we do both.
12.Favorite Christmas Movie? A Christmas Story (you'll shoot your eye out!)
13. When do you start shopping for Christmas? Sometime between the day after Thanksgiving and Christmas Eve
14. Have you ever recycled a Christmas present? Probably, but I don't remember
15. Favorite thing to eat at Christmas? Just about everything
16. Clear lights or colored on the tree? Clear
17. Favorite Christmas song? I'm Gonna Email Santa
18. Travel at Christmas or stay home? Technically, for us, it's kinda the same thing :-)
19. Can you name all of Santa's reindeer? Yes, including Leroy
20. Angel on the tree top or a star? Angel
21. Open the presents Christmas Eve or morning? BOTH
22. Most annoying thing about this time of year? Taking down the decorations.
23. What I love most about Christmas? Christ. Without Him, there is no Christmas. Period. 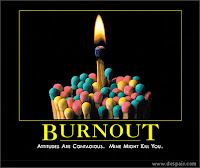