Long way to go, short time to get there...

On my way to a meeting on Thursday, I saw a sign nailed to a telephone pole. Now, I have been keenly aware that people pronounce things differently in various parts of the U.S, but that became quite evident when I read, "Fresh, roasted PECONS" with an arrow pointing to a house. At first, this may seem like a simple misspelling, but in fact, that is exactly how most folks around here SAY that word - "PUH con" whereas I have always called them "Pee-CANS." Anyway, there ya go.

Today, my duties at work included moving metal shelving from the media room out to a flatbed trailer (I was not the only one doing this), and then unloading the shelving at the local college, who donated storage space to us. I'm sure if you've been reading along, you might have gathered that I am not a big fan of manual labor. I do it when it's required, but generally, I'm one of those "white collar desk jockeys." I freely admit it. The world needs people who do the heavy lifting, moving, etc, and I am thankful that they are there to meet those needs. Me? I'd rather do as much work from my desktop as humanly possible. I am more of a troubleshooter, help desk kind of person, I think. Which worked out well for me, because that's generally what my job entails. Every so often, though, I am given tasks that get out my comfort zone. And, I think that is just as important. The more we know how to do, the more we can do. Or at least when we hire someone ELSE to do it, we have an idea what it is we want THEM to do.. :-)

I do not remember the exact context during which the following was uttered during supper tonight at Shan's Mom's house: "You know, like 'beating the monkey' or whatever..." Those words were uttered by Shan's sister. Nick and I burst out laughing. Oh wait, I remember now, we were talking about how Jess (Shan's sister) wants the Judge Judy DVD for Christmas, and how she loves the announcer guy who always makes comments about the plaintiffs and defendants, and how he'll say something like the phrase I mentioned above. I'm not quite sure how beating the monkey came into play, but I would assume it applies to someone who is doing much more than simply "spanking the monkey...."

One of the things I had on my Christmas list was movie or baseball posters for the home office. One of the funny things about that is that I have been so busy putting up posters and signs that I almost do not have any room for more posters... ooops! :-) Oh well, I happen to be one of those people that will create space by tilting a poster this way or that way to give things a funky look. Guess we'll See just how creative I can be.. :-)

Last summer, I had done some extra work at the office, so I earned a flex day. I decided that I would cash in on that day next week. And, while I was at it, I figured I just as well take an annual leave day, too. So, no work for me next week at all!! Well, no work that I'll be paid for anyway.... Turns out, Shan and I will be babysitting our niece (all of a few months old) on Wednesday.

The advantage to a baby not being your own is that you can usually pass it back to the parent once it begins to cry. We won't have such luxury on Wednesday. I'll let you know how it goes...

Daisy has a 20 gallon bucket that we keep her feed in. She has a plastic coffee can that we scoop the feed with and then pour that into her trough. When I went to feed her tonight (Friday), that goofy red plastic can was through the fence, down the hill, in the field where she grazes. I'm going to have to set up video cameras. I have a feeling she may be sneaking afternoon snacks when we aren't looking.... :-)

What would be my ultimate dream job, if I could make a living at it? I'd own a combination computer service center/sportscard shop. In fact, when I'm like 60-something and I retire, I may open up such a shop - assuming, of course there are still sportscards then, and that I have an inkling as how to repair whatever technology is floating around then! :-) 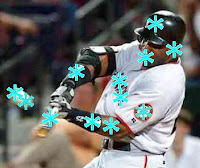 The Prescott Curley Wolves are kicking HUGE butt this year! As best that Shan and I have estimated, we have caused the "mercy" rule to go into effect at least 3 times if not more. The mercy rule says that if you are ahead by 35 points or more, the clock does not stop for any reason. SUH-WEET!