It's the great chow-down, Charlie Brown

The "Great Chow-down" (or, as most Americans call it, Thanksgiving) began with a slow roll out of bed. No, not a sweet roll or a cinnamon roll. We got up and turned on the TV so we could watch the Macy's/Thanksgiving (depending on which channel you're watching) parade. We tuned in for the balloons and floats, of course, but also because we were hoping to see a local dance troupe perform. We never saw them, and I Googled them, but came up empty.. Oh well... 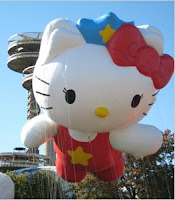 I have to say the OU band was one of the most impressive groups during the parade. I don't know why they bother with singers/performers when all they do is lip-sync their songs. Who cares? I don't care to watch Jordin Sparks or Barbie, for that matter, lip-sync (badly) their songs during the parade. Play the song and let the "star" wave or whatever, but why even bother with the whole "faking it" thing? I mean, heck, Milli Vanilli had a zillion CDs and tapes burned for it, and here we are promoting the act ourselves! It looks stupid, we all know it's an act, so give it up.

Around noon, we walked next door to Shan's folks' place for the great chow-down. It is quite a mix for us because we have different traditions that come together - turkey, ham, dressing, stuffing, corn, peas, potatoes, sweet potatoes, and lots more. This year, Shan made "poor man's turtles" - a small pretzel, a rolo, heated slightly then topped with a pecan - and, man were they GOOOOOOOD!!!! :-) I'm looking forward to a nice slab of turkey on a sandwich tomorrow! :-) 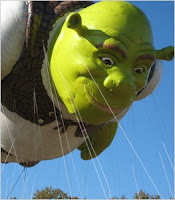 After lunch, we hung out for a bit, then took a little snooze. After the snooze, we hung out some more and Tyler and I ended up playing some Battlefield 1942. We had a lot of fun, mainly because we decided to be on opposite teams this time. It is so much more fun trying to outwit and outsmart another human than the dopey computer people! Later, Emily and I played BF1942, where we sat together and she would use the 'walking' keys and I would 'steer' us with the mouse. We had a lot of fun!

After that, we went to Mom's for a while, and we got there just in time to watch "Evan Almighty." It's a cute movie, and I really wish they would have gotten Jim Carrey to play the main character, but I'm sure he demanded more money than the people were willing to pay...

After the movie, we came home and hung out for a bit before Shan reminded me that it was TIME TO 80'S! :-) I told you, we're addicted to the trivia game! :-) 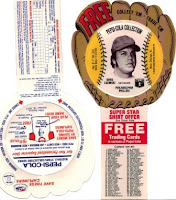 I mentioned the other day that I had some things I am/was selling on eBay. Well, out of the 134 items that ended today, I sold 81 of them! I think that's a pretty good return, especially since a couple of the items went double-digit pricing (not bad for some trading cards). I listed three "types" of items - 1995 Classic Phone Cards (featuring a different player on each card), 1977 Pepsi Discs w/Gloves, and some eTopps cards that were pretty much just taking up space in my eTopps portfolio. I can say that I will be a busy bee when it comes time to ship those Pepsi items and the Phone Cards! :-)

Now, Tyler wants me to try and sell off some of his Gameboy Advance games that he doesn't play anymore. We'll see how that goes! :-)

We have started doing our "Biggest Loser" DVD again (every other day), and I have to say that I feel like I am dying when we get done! It's amazing out "out of practice" (okay, out of shape) it is easy to get when you stop exercising. Yeah, I know, if you never start, then you never have to worry about that, right? LOL... But, the one thing I have learned about watching the Biggest Loser on TV is that it is not always about losing the weight for the sake of "looking better." Often, these folks did not start out as big as they got, but some of them have always been big. And, what it boils down to is sometimes the difference in living 3, 5, 10 or more years longer.

Now, I'm the first to admit, I hate all the exercise. But, if it means I get to spend another year with my kids, or my grand kids (when that day comes), then for me, it is worth putting a little effort into it. No, I don't go hog-wild or anything. Heck, right now, I can't even do some of the things on the DVD. But, I do what I can, and when I can't do what's being shown, I go back to something I can do. I figure that as long as I am doing SOMETHING, it's better than nothing.

Have I changed my diet? Only in one respect: I stop eating when I start to feel full. Not when I *am* full, but a hair before that. I still snack, eat some "bad" foods, and generally eat what I want. I am not going to starve myself or deprive myself of the things I like. I am not going to change my entire way of living, but rather do a few smaller things to help me live the life I like to live. I have heard many times that the key to eating right is to eat smaller meals more often. I'm not quite doing that, but I no longer feel like I need to eat a house three times a day. I eat until I start to feel full. Then I stop. Later, if I feel like eating something (pears, pretzels, chips, candy, cereal, ice cream, whatever), then I eat something.

I do want to lose some weight only because I don't like the way I look. I have a spare tire and I don't want it to be as big as it is. Do I want 6-pack abs? No. I just don't want the built-in cup holder either.. :-)