Truck Photos and other thoughts

Barry Bonds' 755 and 756 homerun balls will be auctioned off, but not on eBay! The owners of those two balls have inked a deal with Southeby's to sell the balls in an online auction. Estimates are that the record-setting 757 ball will go for about $500,000. More info is on the SCPAuctions site.

In a tech-related story, a guy who was busted for uploading Star Wars III to the Internet, served time in jail and is under house arrest. So what, you say? well, he is ranting and whining that part of his sentence includes computer-monitoring software that must be used on his computer. So what, you say? Well, the software only runs on Windows and he uses Linux. Boo-hoo... This guy needs a life. Heck, at this point, he should feel lucky to even be allowed on the 'net at all, let alone own a computer! The story is on CNet news.

And, how's this one for ya? Elton John hates the Internet. He says that we should shut the Internet off for five years and see how creative people become again. In an interview, he blasts the Internet for all kinds of things. Here's the rub, not only is his OWN web site up and running, but he recently posted his entire music catalogue online for purchase! Evidently, he doesn't hate it THAT much... :-) 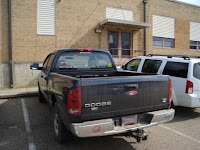 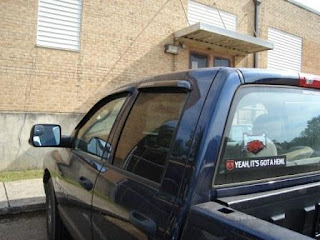 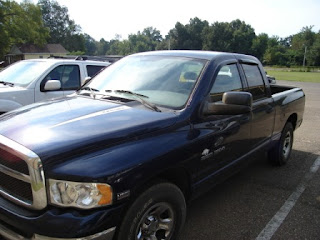 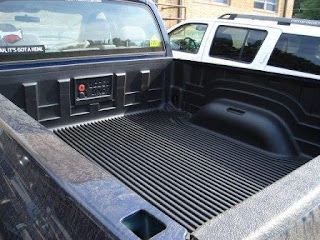 I haven't posted pictures of my truck lately, so I thought I would show off the most recent updates! :-) On Saturday, I got my bedliner! I am VERY happy about having a bedliner for my truck, and wish I had asked for one when I first got my truck! :-) While I was there, I also had them put on the Vent Visors over the windows (keeps rain out, lets air in).

Other things that I cannot remember if I've posted or not: Razorback decals above the "RAM 1500" on each door, the Indians flame logo on the tailgate, "HemiTruckClub.com" at the top of the rear window, and a razorback cling inside the back window. I dunno if those are 'new' to y'all or not, but I thought I'd share 'em anyway... :-) Here is a weird thing I have noticed that I do: If I look at a clock to check the time, and the time reads 9:11, I always stop and think about 9/11 for a moment or two. It's like some kind of reminder for me. I didn't know if I was the only that did that or not, and if I am, well, just add it to the growing list of weird things I do! :-) On Sunday, Emily and I had quite a day... We played cars, played Barbies (well, I was the guy dolls, except for one Barbie that we deemed the "ding-donger" because she always rang the doorbell on the Barbie House and ran away...), watched a slew of Spongebob videos from one of Tyler's DVD's, fed and watered the animals, and then she helped me clear out some overgrowth/brush that was blocking the gate to where Daisy is... We both hit the bed at about 8:50 and didn't wake up until Monday morning! :-)
on August 27, 2007