When I first got my MP3 player, I loaded it up with about 150 songs. Seeing as how I am not in my vehicle enough to go through that many songs, I decided to work in smaller numbers, and just update more often. That was good in theory. In practice, even 45 songs can be burned through pretty quickly, especially if I am not in the mood for a particular song or 'style' at that moment. At least with 150 songs on there, I could skip to the ones I wanted. Now, if I really wanted to go all-out, I would dump all (or what all would fit) of my music onto the player and then I could go through and pick what I wanted to hear when I wanted to hear it. The problem with that is that my player only goes forward or backward, though I could create a "My Selections" playlist and edit it at various times. But usually, if I am on song 79 and want number 375, then I have to wing my around until I get to the song I want. That is not a complaint against the player, because I love it (and it matches my truck to boot!!).

I just need to find my "comfort" zone and see how many songs I am happy with on the player. Granted, part of my problem is that I like to take my "new, untested" music with me. This means that I have a bunch of (for example) Miko Marks songs on there now. While I like a lot of her music, some of it I could live without, and sometimes I am not in the mood to listen to the same artist play 8-10 songs in a row, ya know? Now, one of the very cool things about my player is that it will do random song playing, if I tell it to. That makes for some very interesting listening "adventures." It also plays the songs in order by filename (that is how it normally operates). What is so cool about that? Just by adding "03" or "15" or whatever numbers I wish to the beginning of the filenames, I can create my own playlists. It is very easy to do, and I can do it while the player is hooked up to my computer, on the fly. :-)

I will say when riding with the kids has also forced me to think about the order of songs. Not so much because I might have something they shouldn't hear, but because if I group the songs I know THEY want to hear together, I will spend less time fast-forwarding to "their" songs. So, in a nutshell, 150 was almost too many, and 45 is way too few... :-)

Now that Sharepoint is behaving, I am branching out to see what else it can do that I haven't been able to try. Since I seem to have my head stuck in the search features, I thought I would try "Keywording." Now, the idea is that I can create a list of words that I think people will type while looking for content. For example, one of our providers is the Distance Learning Center out of Maumelle, AR. In the course database, they are listed as "ADE Distance Learning Center." Okay, so? Well, most folks call it the "DLC," or the "ADE-DLC," or maybe "DLC-Maumelle." I want people to be able to type the "common" words and phrases they sue for things like that and be able to find the information, regardless of how it is actually listed in the search database... I've tried 3 or 4 times, and cannot get it to behave. So, I did two things that I have come accustomed to doing when it comes to sharepoint: 1) post a message on Sharepoint-U, and 2) back away from keyboard. I have learned that if I leave it alone, an idea may hit me when I least expect it... Guess we'll see... :-) 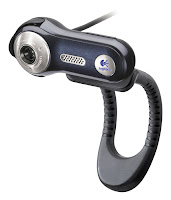 Speaking of branching out, I connected my Logitech Fusion camera to my desktop in order to connect to my school sites without needing to use the "big" equipment in the Distance Learning lab. this is useful when our lab is booked, or when I don't feel like getting my big sorry butt out of the chair.. :-) I digress... Because the state has it's own private network for video data, connecting to sites with the computer I use for general work is something of a nightmare. Right now, I have to (literally) unplug one wire running into the back of my computer and plug in another. But, I have a network adapter on order that should help me solve that problem. I should be able to run data on one card and video on the other. In any case, where i was going with this whole story was Seoul, Korea. Seriously. I poked around the Internet and found a list of publicly available "test" numbers for video equipment. One of them is in Seoul. So, this morning, I fired up my camera and dialed the number. i have no idea what the time difference is (and yes I could look it up), but I connected and the room was dark. i could tell it is some kind of office, but that was about it. I also connected to a site in Virginia, Texas, and somewhere else (I forget now that I am such the world traveler). Once again, sit amazed at the technology we have available to us. i can sit at my desk in Hope, Arkansas, and connect (over the Internet - no charge) to another system in KOREA, and had there been someone there, I could have talked (assuming he/she spoke English) to that person. The whole thing is just... COOL! :-)

Now, I know, people will say, "But, we've been doing that with webcams and yahoo (or whatever) for years!" Yes, I know. But, much like when I open a pack of baseball cards and get "the one I needed," it is the awe and wonder of it that still gets me.

I have been talking with a person at the National baseball Hall of Fame in order to set up a lesson between them and one of my schools. And the whole thing gives me goosebumps and leaves me wide-eyed with wonder and amazement. I mean, really, HOW COOL IS THIS!?!? And, to be PAID to do it!? I know how blessed I am, and maybe that's what plays a part in my wonderment over technology that some people see as "every day..." There is a part of me that has never grown up, and I hope it never does...

I received an email from a teacher I used to provide tech training for. The issue was (or is) a weird sound problem. Some things (not all) sound as if there are chipmunks in the computer. I offered a few suggestions, poked around the 'net, and came across an idea that should have first struck me - reinstall the sound driver. When things go haywire, the first place t look in most cases is the software controlling the errant hardware. A simple rule I forgot... Don't know if it will fix the problem or not, but it is always worth a shot! Of course, since it is a school computer, the technology coordinator at the district may have to be the one to fix it. Which goes to show you a lot - this teacher contacted me instead of the local tech... That's not bragging on me, but rather serves to point out that tech support people need people skills as much as they need techie skills....

Sonic claims there are 168,894 possible drink combinations. And, of course, I decided to check it out... How did they come up with this number? The answer can be found on various sites on the Web, but I thought I would just go ahead and share the answer with you (why make you do all the work, after all?): According to the posts, "They gave 13 base drinks, and said that 5 of those base drinks already have one of the 16 add-ins. There are 6 other drinks they count in after since they don't normally get an add-in. Then, they subtract 1 for the base slush, since not many people would want a flavorless slush." and, in an apparent e-mail directly from someone at Sonic, we have: "First, we have 8 "base drinks" and 5 "drinks mixed with water" for a total of 13 - however, the drinks mixed with water already contain one of the flavors, so you have to compute them separately. Hope that makes sense - for example, a Lemonade couldn't be mixed with lemon, so for those other 5 drinks, you drop the number of add-ins to 15. (Then once you're all done, you have to subtract one for "base slush" which no one would order by itself, without an add-in and also add 6 drinks that we sell outright with no addin options such as Apple Juice, Orange Juice, Iced Tea, etc.)"

I'll give you time to re-read that.... I'm not a math person, so the whole "combination"/"permutation" formula thing is lost on me. So, I looked it up... Turns out that because it doesn't matter what order the add-ins are (er, uh) added, then we can use a combination formula. Evidently, if order were important, we'd have to use a permutation... LOL, as if I even know what I'm telling you... :-) Anyway, because of the way Sonic figures it up, it's not a straight-forward formula (It's a couple of combinations with a few additions, multiplications and subtractions thrown in for good measure).

Now, don't you feel better? I know I do.... (BTW, I posted on that web site in order to get a math person to explain it. We'll see if they explain it like i did here.. LOL)