In light of my recent bouts with Sharepoint, servers, and technology in general, I find it quite the coincidence that I should find an email from TechRepublic with a link to the origins of "Murphy's Law." As it so happens, there really was a Murphy (I say was, but he may still be alive for all I know) in the late 40's for which the phrase "Anything that can happen, will happen" is attributed. Since I've provided a link, I won't rehash the details, but know my link points to the "meat" of the story on the article's Page 2. If you wish to read the whole article, then you can scroll to the bottom of that page and click on the "1."

One of the groups I listen to (because I found a couple of their songs on eMusic) is a group called "Havablast." They are rockin, loud, sometimes screaming, but what I find most intriguing is their "get up." Bored with "regular" performers, they have gone the way of KISS with costumes, make-up, the whole shebang... Different, that's for sure:

Speaking of Sharepoint, Marilyn spent 6+ hours on the phone with a guy from Fargo on Thursday, and then more time on Friday talking and resolving issues. She and I both finally feel "good" about Sharepoint - logins work, search works... We were such early adopters than when we hit snags, no one could really help us. Now that the product has been out for a while, it seems more of Microsoft's techs are able to help out. And, he SPOKE ENGLISH!! :-)

For a while now, I have been thinking about how cool it would be to have an LCD screen IN my tailgate. Yeah, I kno,w the cost would be through the roof, I'm sure. But, while I was playing around with some ideas, I came up with a DUAL-LCD tailgate: 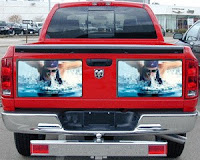 Now, before you ask me, so far as I know, this DOES NOT EXIST. This is not some photo I found on the 'net somewhere. I created it using Paint... But how cool would THAT be!? :-) (Of course, since I just thought of it, I'm sure it has been invented somewhere... Happens to me all the time.)

And, as life would have it, Murphy's Law strikes again. At one point, we had everything Sharepoint running great except for a few "minor" glitches. When I left work, the DL Portal was down and the memory leak in SQL was back.... Really, it is too much to ask for things to... I dunno.. WORK?
on August 24, 2007