The Mentos at the end of the tunnel... 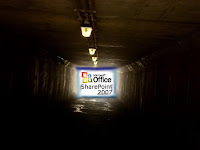 The light at the end of the tunnel may not be the exit, it could be a train! And, lately, that train's name seems to be Sharepoint!! AUGH! I was finally able to nail down the ultimate culprit with our search function not working. turns out to be an issue with the Authentication Provider. (Warning, geek-speak ahead) When the default (usually Port 80) site is set to BASIC authentication, the crawler cannot access the information because the crawler service MUST use NTLM! Well, if someone had told us that to begin with, we wouldn't have these issues, would we!? Turns out the "fix" is to create a mirrored site (extension of the application) and have THAT pointed to a locally-named, locally recognizable (in DNS) name, while the rest of the world see the FQDN! Of course that's the fix! (Wacks hand on head a' la V-8 veggie juice). Of course, I took the low road when "fixing" our server... I just turned on NTLM authentication for the main site, ran the crawl, then set everything back to the way we like it (basic)! :-) Works like a champ!
So, is that a light, or is it Sharepoint coming to run us down (again..and again..and again)?

My Aunt asked me what kind of bedliner I bought for my truck. I bought a drop-in, and I bought that kind for two reasons (well, three, I guess):

Although spray-in liners are nice, even on sale they are about $300 aroud here, and that was more than I wanted to pay for a bedliner period (regardless of type). While bedliners are great to have, there may be times that I don't want the bedliner in my truck (can I think of one of those times right now? Of course not...). So, a drop-in that I can "drop-out" may prove very handy down the road. If it turns out that I'm wrong, and I never take it out and have to ultimately replace the bed, I imagine that by the time that happens, I will either have sold the truck or a replacement bed for a 2004 Ram will be cheaper at that time than a spray-in liner is now... :-) So, that's why I went with drop-in.... :-)

After I typed my reasons, i decided to poke around the 'net to see what other people thought about drop-in vs. spray-on... While there are people who are polarized to one side or the other, many folks see the advantages to both kinds. One guy, though, wrote something that caught my attention: I'm a parts manager at a Dodge dealer and received info on conventional vs spray on bedliners. Plastic bedliners(Mopar, I don't know about other brands) offer 2x the impact resistance, 10x the abrasion resistance, 21x the UV resistance, require no drilling or scuffing on the bed, most offer a lifetime warranty, and are 100% recyclable. With that being actual testing info, I know what I want in my truck.

I read a lot of complaints about fading and knicking/denting with spray-ons. I also read issues with drop-ins (rusting the bed being a concern, yet even after 5-6 years, most people said there was no rusting though the paint had been worn off to the shiny metal). I like my drop-in, and it was only $150 INSTALLED. Can't complain about that at all.... :-)

I guess no matter hwo much money someone makes, if they have superstitions, they have them... While reading various articles about Sharepoint, I came across a couple sites that talked about the new version of Office. The current version is Office 2007, which is really Office version 12. Logically, the next version should be Office 13, but apparently at Microsoft, 13 is an unlucky number, and so the next version is codenamed "Office 14." Billions of bucks, and Gates is still afraid of lil ol' 13...... :-) (Source1, source2, source3)

I took the kids outside on Monday for the "Great Mentos Demonstration." We opened up a bottle of Diet Coke, dropped in about 5 Mentos, and WHOOSH! Diet Coke shot up like Old Faithful herself! It was one of the coolest things I have witnessed. We're doing it again when I buy some more diet cola. I'm hoping cheap-y Great Value will have the same effect without hitting so hard on the wallet... :-)

Tyler dropped a couple into a regular Coke can, and we watched as nothing happened....for about 20 seconds... then, it started pouring, overflowing. Now, THAT'S a great trick to play on someone! :-)