This week, I am learning Dreamweaver at work. It's a web page design and authoring program. It is totally (so far as we can tell, anyway) incompatible with the Sharepoint we use for 3/4's of the sites we manage... One site will be fine with it... What do I plan on doing with it? I have no idea yet... It won't be wasted or lost on me, I just don't have an immediate application for it... Oh well, any learnin' is good learnin', right?

As I mentioned before, I have been working with one of Shan's friend's computer (the one with Vista). Tonight, we had trouble getting an updated driver. During the process of troubleshooting and copying old mail into the new mail program for Vista, Janette served me a concoction of Sierra Mist and Orange-Tangerine tea. My grandmother on my Dad's side used to drink "high balls" which (from what I remember) were basically 7-up and whiskey in a glass with ice. For whatever reason, when I was handed a glass of the Mist/tea drink, it instantly smelled like Grandma's High Balls... I was assured there was no alcohol in the drink, but Bill (Janette's husband) offered to put some in... Well, he only did that figuring it would help get me through the evening of listening to Shan and Janette talking while I worked on the computer.. :-) I declined the offer... :-)

We have been playing baseball with the kids the past few days. Do you have any idea how much energy two kids can have!? Good heavens! Emily is doing really well, learning how to hold the bat, swing at the ball, and run the bases (which consist of the van (1st), a tree (2nd), a patch of dirt on the ground (3rd), and the general vicinity of the bat (home). Now, since we live on a farm, we had to institute a rule that you won't find in most rulebooks.... If the ball goes through the fence to where the cows are, you're out. At first, we said it would be a ground-rule double, but those came too frequently for our liking, so we added the challenge of NOT hitting one out of the park... :-) Oh, and if the ball rolls under the van or the truck, it's an automatic one-base rule... After all, it wouldn't be fair for the runner to score a home run when the other team was trying to get the ball from under said obstacles..... :-) Really, things haven't changed much since I was a kid playing ball in the apartment complex where we lived... Sure, the hazards are different, but we still made up goofy rules to deal them back then, too....

Okay, have you heard about the 'texting wizard?' This girl texted the phrase: "Supercalifragilisticexpialidoucious! Even though the sound of it is something quite atrocious. If you say it loud enough you'll always sound precocious." So what you say?? How about doing it in FIFTEEN SECONDS! Granted, she has a keyboard-type phone, but I sure in the heck couldn't type it on a regular keyboard, let alone a thumb-driven one! Plus, she pocketed $25000 for her 'trouble...'

Now, here's a story I had not of until today... Evidently, "way back" in 1982 (when Michael Jackson was between "Off the Wall" and "Thriller"), a couple of guys decided to go out shooting... They picked on a cactus or two, and one seemingly took offense to having its parts blown off, so it reached out and killed one of the guys by falling on him and impaling him with FOUR-FOOT long needles! Ouch... You know me, I "scopes-ed" it, and, jinkies, Scooby, it's REAL!

Dad sent some pictures of yet ANOTHER rocket attack near where he lives and works in Iraq... This time, the rocket hit a warehouse and no one was injured.... 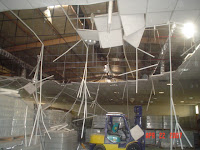 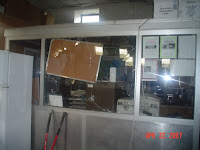 And, I have to thank my Aunt for a very humorous email... If you do a Google Map and ask for directions from New York, NY to Plymouth, UK, you'll see a very funny step in there (around step 24). Plus, if you switch to the 'printer-friendly' version, it even tells you how long step 24 should take! :-) Try it!
on April 23, 2007