How hard could this be?

As you are well aware by now, I'm sure, I am not mechanically nor 'home improvementally' inclined. So, when the topic of getting new flooring for the kitchen came up, I thought, "How hard could this be? Buy some stuff, put it down, good to go... right?" Then, we started the 'research' portion of the job. Wait a minute, there's CUTTING involved? Like, with circular saws, jigsaws, and the equivalent of a paper-cutter for flooring!? Nope. Ain't gonna happen (by me anyway).

We opted to go the "Let Lowe's install it" route. After staying home to watch (er, supervise) Terry and Mike measure, cut, snap, trim, repeat nearly 250 times, I decided the money spent for them to install out flooring was WELL WORTH IT!

Arkansas is a small town, and so it happens that we knew Terry! Terry and Mike (and I when I could participate in the fun) picked on each other, ribbed each other, etc. It was a lot of fun, while still being very productive. At some point, though, things seemed to hit a lull and it took them longer to finish than anyone thought it would. I think part of the reason was that Mike had to go do an estimate for someone, which left Terry to do the work. I volunteered, but the politely told me my services were not needed... LOL.. Of course, I had told them about some of my ineptness, so they may have been a bit scared... :-)

Turns out Mike is a huge Idol fan, and he was bummed when Haley got the boot. Also, he cannot stand Sanjaya. Of course, Terry ribbed Mike every chance he could about LIKING Sanjaya, though Terry doesn't watch Idol and couldn't remember Sanjie's name half the time.. LOL!

I will admit, as long as I had the right tools, I believe I could lay glueless laminate flooring if I had to.... :-)

So, wanna see some pics? 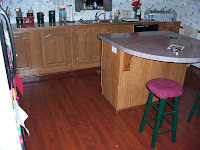 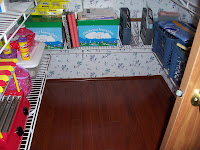 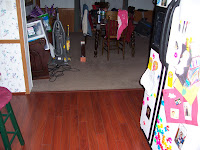 I spent the past couple of days (well, mostly last night and this morning) copying pictures from 3.5-inch floppy disks to my hard drive. There were a TON of them! The 'oldest' were from 1997/1998 when I first started playing with digital cameras. That happens to also be the time that the Prescott Curly Wolverettes Girls Basketball team was headed for the state championship... I have over 300 photos of Shan's sister's ballgames! I had no idea I had taken so many! Tyler was a tiny tot then, for sure! :-)

At various points, I relied on my 'old school' DOS commands to help copy the files. See, there is nothing like using XCOPY A:*.?pg pix1 /c/i... :-) The biggest bonus is the "/c" part.. It means, "If the computer hits a snag trying to copy these files from such old disks, skip the snag and keep copying!" And, let me tell ya, there were some disks that had several 'snags' just because they were from 1998... I mean, really, come on, isn't technology supposed to last forever!?

Speaking of lasting forever... You know, when CD-R's first came out, people were told the discs would last 100 years. Turns out you are lucky if they last 5-10 in the real world. Yeap, you read that right. If you have backups on CD or files on CD, and those files are 5-10 years old, you better copy them to a NEW cd, or flash drive, or something! And, if the info is on floppies, you need to start ASAP! :-)

My Dad sent pictures of an ominous storm that blew through the encampment in Iraq (the dark pictures were taken 20 minutes after the lighter ones....): 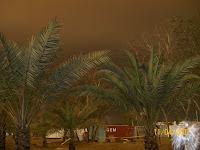 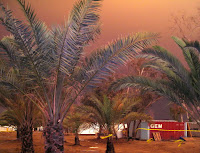 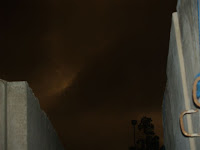 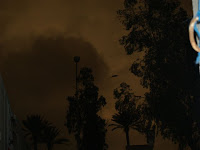 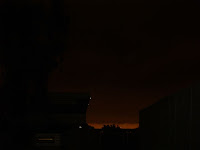 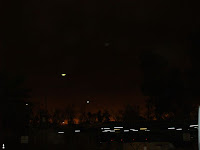 Kurt Vonnegut died Wednesday.... He is/was one of the most influential writers of modern times. His writing, thoughts, and wisdom will be missed by many, many current authors and author-wannabes (myself included in that group).