Waxing nostalgia and getting the crud

Well, it happened. I woke one morning during spring break with a dry, ticklish throat. By the day's end, my sinuses were out of whack (or maybe they were in a whack, or just plain whacked out, who really knows (nose?)). The next morning, I was pretty sure that someone had hijacked my HEMI, drove it through the house in such a strategic manner that they only managed to run me over without waking anyone or damaging furniture. As the expression goes, I was way-laid (weigh-laid?). And, no not like "WAY laid," either... I couldn't breathe, barely made it to the couch (I hate staying in bed all day), and generally slept most of the day away. Now, usually, I am not one of those whiny-butt guys when I get sick. I was not whiny-butt during this, either, but I also didn't get off my duff to do much of anything, which for me is almost the same thing as being a whiner (as opposed to being a whino, which I have already done once in my life, and don't intend to do again, thank you very much). As of this writing, my sinuses are still not right, and I have 'cougher's ribs.' What's that, you ask? You know, when your ribs hurt so much from all the coughing you've done recently that you can't laugh without pulling the muscles in your chest away from your bones...

One of the things I did manage to do over spring break was to clean up the office a bit. During that process, I decided to transfer information from my 3.5-inch floppy disks to my hard drive, and then I'll back it up to CD. Now, I did this once before, but, well, I'm not quite sure what happened to that other CD, and the copied files were deleted long ago... In any case, many of the disks are photo disks - taken with the Mavica camera I used when I worked as a technology coordinator. In my usual, disorganized manner, most of the disks were/are not labeled. Enter: Emily.

Emily, picking up one of these odd-looking things, cuts her eyes to me and asks, "What are these cards for?" I try to explain the concept of floppy disks to my 4-year old. Not really in the least bit interested in the history of computer storage, she interrupts and asks, "Can I help you do the cards?" So, we did the 'cards.'

What we discovered on those 'cards' was an interesting (well, to me anyway) walk down computing's memory lane... Old games, hardware drivers, pictures, programs, etc... And, for the sake of taking up space and wasting your valuable time, I am going to talk a little about some of the things we found.... 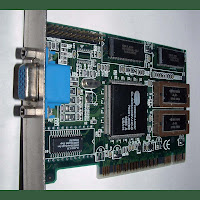 Cirrus Logic video cards/drivers - at one time, Cirrus Logic was the leading, cutting edge video chipset manufacturer. Back in the days of "high-end" 16-bit ISA video cards, and then the move to screaming VLB cards, Cirrus was 'da man.' They also produced video cards for 'entry level' PCI cards. I am guessing, but I think they ran out of steam when ATI, nVidia, and other 3-d companies squeezed Cirrus out of the game... Honestly, I didn't even know they were still around (the company, I mean), but they are... 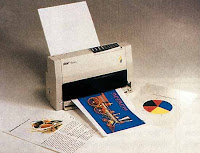 Star Micronics SJ-144 Thermal printer - This little baby was my first IBM-compatible printer (that I can recall anyway). It used these cartridges that were loaded with long, thin, plastic-like ribbons which were coated in a wax-like substance. The printer used a heat (thermal) print head to 'melt' the wax off the ribbon onto the paper. You could (and still can, evidently) buy black ribbons and color ribbons. The color ribbons were really weird, because they had yellow, magenta, cyan, and black in a repeating pattern over the length of the ribbon. You see, once the print head passed over the color, you couldn't (effectively anyway) reuse that same 'strip' of ribbon because the color had been melted off it of. To make matters worse, let's say you printed something that was all green and black... Well, that would use your blue and yellow, but the printer would just have to skip past the magenta on the cartridge. Each LINE you printed took one whole cycle of color! You burned through a color cartridge pretty quickly! :-) If I'm not mistaken, I only threw that thing out a couple years ago... It had been in the top of the closet in the office before that... :-)

Oak Technologies Video card/driver - Another popular video card manufacturer in the 80's and early 90's was Oak Technologies. It seems their web site is down/gone/whatever... I honestly don't remember much about Oak video cards, because at the time I used them, I was mainly into Cirrus Logic. Anyway, seeing a driver disk for an OTIxxx made me do a double-take... :-)

DECNet - When I worked for SAU in Magnolia, they were running DECNet (Digital Equipment Corporation Network). Everything was based on DEC Unix running on DEC Alpha servers. Back then, the machines on campus were running Windows 3.11 (or were being upgraded to it). Eventually, Windows 95 came out, but before that, the DEC network client for Windows was a pain in the rear. Except for one very cool piece.... See, the software came with a utility (the name of which escapes me now) which would read an INI file and automatically create program groups and set their icons. Once we learned the lingo of the application, we used it (even after we switched to a Windows NT environment) to automate desktop installations. It was, truly, one of the coolest things I remember 'discovering' while working there. More about DECNet...
Another, of course, was the World Wide Web - as it had just been 'invented' during that same time... Not the INTERNET, mind you, but the WWW... Some of you may not know, but the WEB was nothing like it is now, and its earliest launch was not really until 1994... Now, you wanna talk about nostalgia....

The World Wide Web in the early days was a nightmare to negotiate. Very few companies had web sites, let alone domain names. On top of that, you had to be specific with cApitAliZATion... If you entered something in ALL CAPS, that was treated differently than something in all lowercase... Internet Explorer, Netscape, Mosaic.... New kids on the block, especially compared to LYNX (which only displays text)... Oh, and getting Winsock configured (the most 'common' Windows version being 'Trumpet Winsock') either went very easily, or you pulled your hair out (which may very well explain a few things about my own head...hmm...). Man, the net sure has come (or fallen, depending on your point of view) a long way since those days...

And, now, I present a (partial) list of games that I found on floppy disk: Freddy Pharkas Frontier Pharmacist, Sea Rogue, Lemmings 2, Super Jeopardy (in EGA!), Wheel of Fortune Deluxe (in VGA!), Classic Concentration (CGA), Card Sharks (CGA), Family Feud (CGA), SimCity (VGA), QuestMaker 2.5, 7 Cities of Gold, Heimdall, Wolfenstein 3-D, and many, many more.... As it turns out, you can actually DOWNLOAD many of these games from places like The-Underdogs, Abandonia, and XTC-Abandonware... Of course, most of these games won't run correctly (or at all) on today's Windows versions, so you may want to get DOSBox to run them in a virtual DOS computer on your system... I also recommend using a 'frontend' for DOSBox, like D-Fend (makes setting up and playing old games MUCH easier!) I spent some time playing Lemmings 2 - I had forgotten how much FUN that game is! :-)