Shan asked me why I was so bent on getting the MacOS stuff to work on my computer. The truth is, I have no idea what possible benefits there are of playing around with MacOS on my computer (or at all for that matter). The truth is, it's a nerd/geek thing... The very fact that I could run MacOS at all on a PC... Add to that the idea of running MacOS *AND* Windows XP at the same time ON a pc, and you have nerdville nirvana... :-)

And, so, I reinstalled the OS in VMWARE, only this time I *only* selected the Intel Kext. I left the room for a while and when I came back, not only was the OS installed, it was waiting for me to continue the registration and set-up of the OS. I was like a kid a Christmas... After walking through the steps, I was presented with the blue background with swishes and the MacOS toolbar! Finally, all was right! :-)

Well, not quite. It took a bit of playing around to get the network stuff to work. But, I finally did....until I accidentally pressed CTRL-ALT-DEL while in full-screen mode for VMWARE... Things went terribly, horribly wrong. I'm hoping that a reboot of the PC will fix whatever I crashed in VMWARE... :-)

I was, however, smart enough to grab a few screen shots before I crashed the network (the OS actually loads and runs still, which means I can play - just not online...) 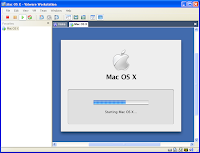 Surfing the web with Safari! (Before the three-finger salute..ouch):

The MAC Dashboard... Frankly, I don't see the big deal with this application. It sits on top of your other programs and just seems to be in the way... Perhaps a 'maccie' will enlighten me (assuming there may be one or more of those reading, though I don't know of any that are...): 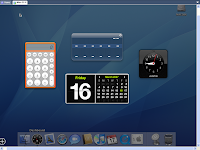