Daily Photo (Valentines for the departed) 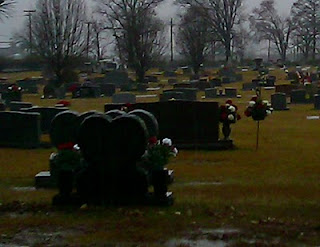 Valentines
The rain poured down from the sky above, as if from huge watering cans of days gone by.  The kind of watering cans that were made of tin and whose spout ended with a large round disc punched with tiny holes so the water wouldn't fall out in a stream, but rather like a constant soft waterfall.  I approached the place where beloveds of ages long gone, and those of the not so long ago, find rest for the rest of our own days.  And there, I saw gathered three stone hearts soaking up the constant shower from above.  I only had the camera in my phone, so I snapped a photo (below), and then another (above).  It wasn't until I returned to my home that I saw the reds and whites, flowers from Christmas this past and of Valentine's Day to come.  The falling water created a veil through which only the sense of those things could be discerned.  Though I tried to make things clearer, brighter, more lifelike, nothing seemed as poignant as the raw (albeit cropped) photos that you see here.  The photo below shows the place where my father spends his eternity.  His is the one with red and white on the left side of the photo. 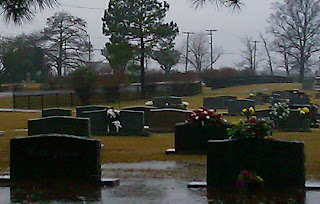