My job is never the same... 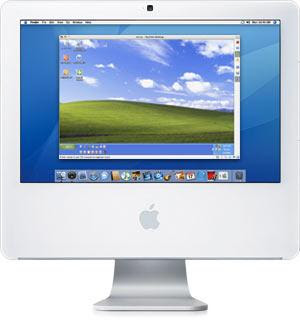 I get to do all kinds of different things at work. Today, my main goal was to finally get our twelve MacBooks set up with Parallels and Windows XP so that we can use the laptops for training this summer. Of course, what should have been a "15 minute job" turned into an all-day affair that ultimately *could* have taken about 45 minutes.

Things went wrong from the beginning. I had an 'old' copy of Windows XP, and the Parallels software was none too happy about it. I guess before I go too much further, I should explain what Parallels does, right? Well, it lets you run any operating system (say, Windows XP) on the Mac while still using the Mac as a Mac. It basically lets you run Windows as if Windows was just another program. So, let's say we need 10 laptops for a Word 2007 class. Well, since Word 2007 doesn't run on a mac, we can run Office07 on a Mac INSIDE the 'virtual' Windows XP. It's like having two laptops in one, although you can install just about any system you want, so really, you could have Windows XP, Vista, Linux, or more all running on the mac with the same one machine! It's very cool stuff.

Well, after fighting for a couple hours, I finally got ONE of the macs to take the old Windows, which I then updated to the latest version of XP (that is, I applied all the patches and service packs). After I thought about it for a bit, I realized that I could take that one virtual XP and copy it to each of the other Macs. See, when you create a 'virtual' system, everything is kept in one nice (albeit HUGE) file! So, i burned a copy of the virtual image, which fit nicely on a DVD. Then, i copied it to the next Mac and things were looking good!

Then, I had another thought: Why not set up ONE Mac's XP just like I want it (with the right software, settings for XP, etc) and then copy THAT to the other Macs!? Brilliant!

So, after a couple more hours of getting XP just like I wanted it, I had a virtual image too big to even fit on a DVD! Time to do some clipping, deleting, and pruning. I whittled down the virtual image size to where it would just about fit on a DVD, then I compressed that image down further. If you've ever messed with ZIP files, it's the same thing, but on a grander scale.

We have a 7-bay DVD duplicator here, so I made 7 copies of the DVD and walked around installing the images to various macs, moving the DVDs from machine to machine as i went along, knocking out all the machines in two whacks! It was a great!

I still have a little tweaking I need to do on each machine, but that's minor and the main thing is that the machines are ready for summer! 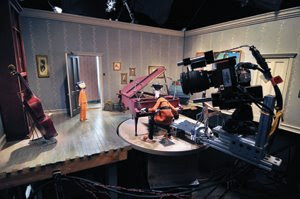 After I finished the XP-on-Mac installs, I started cleaning my office desk. It's a mess. Seriously. Well, I came across the January issue of "Advanced Imaging" and flipped through it. Here is where I once again talk about the semi-work-related magazines I get. Even though most of what AI discusses never makes into anything I do, every once in a while, I come across a pretty cool article. The issue happened to be the "2009 Solutions of the Year," which touted all KINDS of cool advancements in the field of imaging. Things like a camera that shoot high speed images of the world's largest parachute attached to a rocket. Why do that? so scientists can see exactly what's going on and find ways to improve space travel (and return for that matter).

There was also an article about the process of making "Coraline." I am not a Tim Burton fan, and don't care much for the whole 'claymation/stop-motion' thing. But, I found it very interesting that the camera techniques used for Coraline were the first time they had been used. Ever. It was shot all digital, which turns out to be quite a feat. Then, on top of that, it was shot in 3D - again, all digitally. I love movies, and I love the technology of movies - the first films, first talking movies, color, digital, etc. I think it is amazing how people come with various techniques to solve the problems they are having in expressing just what they want the audience to see. "The Matrix" was a milestone in cinematic form with the whole 'spinning around the character' thing...

I learned a lot in the article, and plan on using some of article during a movie-making workshop that we'll hold this summer. Awesome!

I tried to find a link to the article itself, but the site was being cantankerous. You can try this link, if you want to: Coraline Article.
on February 19, 2009