Today (April 5) is my Mom's birthday. For her birthday, we got her a shirt, pants, socks, a Mike Wallace interviews book, and some cold hard cash. We got her a cake for her birthday, and Emily wanted her to get Hannah Montana on it, so we did! Later in the day, we had a 'movie night' and we all watched Gameplan and Enchanted!

Above are pics from the day's events. We got her trick candles, which is why you see all the SMOKE in some of the pics! Other pics are some random things I took pictures of, too. I felt like getting a little creative... LOL 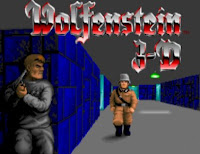 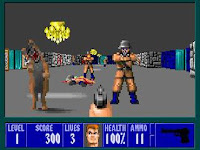 Okay, I am about to get geeky... I warned ya... I have recently read at least three different articles in which the topic of discussion centered around 1st person shooter games. Each of the articles only mentioned "Doom" and made no mention of "Wolfenstein 3-D." Why is this a big deal? Because Wolf-3d (as it is affectionately known) is THE godfather of 1st person shooters. Okay, technically, something like "BattleZone" could be said to be the godfather of them all. But, as far as I am concerned, 1st person shooters did not (and I dare say WOULD not) be where they are today if it weren't for Wolf-3d. I remember walking through Sears and there was this kid playing Wolf 3d on one of their demo computers. The graphics were blocky (see above), but I was instantly hooked. Here were not wire frame characters on the screen, but actual figures, and they MOVED (plus talked, barked, etc)! This was AWESOME! Wolf-3d also helped bring the concept of "Shareware" into the mainstream computer world. You could try the software before you bought it. 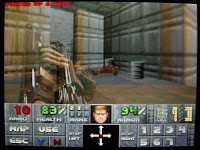 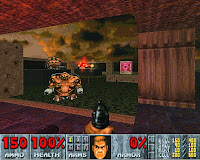 So, why is "Doom" usually the "starting point" when discussing 1st person shooters? Because Doom did two things that Wolf-3d did not (or could not) do: environments with curved walls, and multiplayer action. Wolf-3d was very "graph-paper" like. You could go forward, backward, left and right. The walls were all laid out in grid fashion. In Doom, you could use the diagonal directions more fluidly, plus things were much more open and not so 'square.' Of course, multiplayer was the breakthrough key to it all. You could actually blast your friends away with your weapons of choice! I remember working for a university at the time we were debating going to a Windows NT environment or a Netware environment. The Netware folks came in and started talking about DOS networking, etc etc.... Not long into the discussion, the guy I worked with and I looked at each other, knowing we had just been given the secret to life: IPX networking. Before the end of the work day, we have networked shareware copies of Doom and were happily blasting each other away. That gave way, eventually, to Duke Nuke'em 3D with custom maps etc.

I give Doom all the props it deserves. But, I have a real problem with all these supposed "experts" in the computer gaming world who always refer only as far as back as "Doom." Like it or not, all 1st person shooters (with solid environments) owe their beginnings to Wolf-3d. I do not understand why writers don't give proper credit where it is due, just as I don't understand why more gamers aren't raising the same complaint as I am. Perhaps the fact is that no one really gives a rip. I do. I love the 1st person shooter (Wolf-3d, Doom, Duke3d, all the way up to Crysis, Battlefield, etc), and I think if someone is going to write about the genre and talk about its beginnings, the discussion needs to refer back to Wolf3d and not stop at the "good old days of Doom..."
on April 05, 2008