Yo Ho! and Peoples Choice?

I have written before about the magazines I get at work. Well, one of them is something about Visual Studio, Microsoft's programming language application. I'm sure one day, I will sit down and USE VB, especially with the .Net stuff for Sharepoint, but right now, I read through the magazine and truly have no idea what they are talking about. Today, however, there was a bonus item - a map! A pirate map of some sort... Turns out, it is a board game! Very cool! It is the Visual Studio 2008 "A Developer's Life for Me!" and you can print out your own map and game pieces with playing cards and have your own pirate-themed developer board game (weird combination, for sure). I recommend you check out the playing cards - some are hilarious: Swashbuckling injuries are now covered under insurance. MOVE AHEAD THREE RED SPOTS; Drunk with power, the new boss bans coding. PICK UP THE GAME AND GO HOME; You’ve squandered time on carousin’ and merry-makin’. MOVE TO CODER’S BLOCK AND MISS YOUR NEXT TURN.

Playing with Paint.net, I modified an icon of Bloo and thought I would show it off for no good reason.

We watched a bit of the People's Choice Awards tonight. Did you watch it? Okay, it was just Queen Latifa doing some shtick, poking fun at the strike (sorta) and at the "new" format. Some of it was actually kinda funny (her made up theme songs for the show) and some was dumb (pre-recorded "thank yous" with fake 'skits'), but at least it wasn't some stupid "press conference" format!

There were THREE election results today that really mattered to anyone (okay, really only one of these counts): Democratic election and Republican election in New Hampshire and the announcement of the latest inductee to the Baseball Hall of Fame. Can you tell which one matters here? Yeap, you guessed it - and the electee was..... Rich "Goose" Gossage - an awesome closing pitcher, who basically created the position - or at least elevated the importance of having a designated closer in the game. I actually watched the announcement live at work online (don't tell anyone), and it was cool to watch it being streamed live over the 'Net. I admit, I wanted Jim Rice or Bert Blyleven to get the nod, but with Goose getting 86% of the votes, it was a no-brainer. Congrats to the Goose! 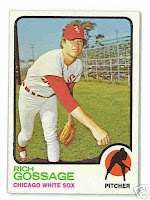