I seemed to have forgotten one of the main points of my DTV post - if you have Dish or DirecTV, then you're fine for the switchover. If you have cable, you are most likely okay, assuming your cable provider is digital (you'd have to call them and ask). If you are getting your TV through some other means (via Internet/Fiber, for example), you should also be well ahead of the game. The only folks that have to "worry" are those who currently have an "over-the-air" antenna (attached to the side of your house or on your rooftop) or those folks using "rabbit ears." 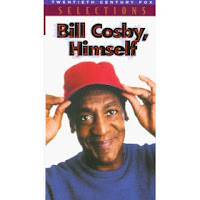 Shan and I were surfing channels tonight and came across Bill Cosby's "Himself." That is by far one of my all-time favorite stand-up (or sit-down in this case) routines/shows ever. I love Eddie Murphy's "Raw" and "Delirious," but Cosby is one of the greatest storytellers of all-time. "Himself" was recorded/aired in 1983 - TWENTY-FIVE years ago. Yet, his telling of the drunks, the dentist's office, and having/raising children is on-par today just as it was back then. The big difference is that if you bought a Ferrari for $17000 today, it's either a junker or it's...well, a junker.

If you have never seen this routine, or it has been way too many years since you have seen it, you have GOT to check it out!

Emily is still playing "What would you rather...?" So, the other night while we were watching the Steelers take an incredible early lead, lose it, get it back, and then lose the game, Emily says, "Would you rather watch the Steelers or the Indians?" I was struck silent. Seriously, if I could only choose one, which would it be? As you know, I am a HUGE Tribe fan. I am also a die-hard Stillers fan, born and raised in the 'Burgh. How does one choose between two different sports, being loyally devoted to both teams for many, many years? But, there was the question, and with it, my five-year old's impatient little face.

After weighing the options, the simple truth is that I bleed Black-N-Gold. I love the Tribe, but when faced with the prospect of watching 150+ baseball games versus 16+ football games, I knew I would choose to watch the Steelers and wave my terrible towels (I have a gold one and a black one) all the while.

When Shan read my blog, she was not happy that I had beaten a game she got me just a week earlier (Crysis). I understand her frustration - you spend a chunk of money on a game, and in a relatively short time, the game is "over." But, I play games differently than most of the folks I know. My INITIAL primary objective is to get to the finish line. I play the game for the sole purpose of 'beating' it. Then, I like to go back and try all the things I did not try beforehand. Basically, I go back (often several times over) and I try using more stealth (or less), I try different routes to complete a level, I look for things I missed the first go-round. For me, it is much like the way I watch movies - the first time is wonderfully fun, but I am so busy being engrossed, I miss things, so I go back over and over again. I saw Star Wars three times before I realized Luke said "I can't see a thing" while wearing his Stormtrooper suit. I am a repeat movie-watcher (Shan, by contrast, is not). And, I am a repeat game-player. I even recently reinstalled "Call of Duty 2" and played through it because it had been a while since I played it. Same thing with "Crysis." And, the same thing will be true of "Bee Movie: The Game" once I sit down and finish it.

So, while I do understand the frustration of plunking down a wad of money for a game that is beaten so 'quickly,' I will get many, many more hours of playtime out of it that just playing through one time! :-)

And, while looking through the home office, I realized I had forgotten to mention that Shan (Santa) had placed some very cool 3-D decals/scrap booking embellishments in my stocking: 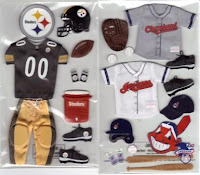