I'm sure I've mentioned that we enjoy watching "The Biggest Loser" (no, that was NOT a reference to the Razorbacks...), and last night was the season finale... Jaron from Arkansas missed out on the $100,000 'bonus' prize by three pounds... Man, THREE pounds... Still, he lost a whopping 160 pounds in the process! Considering he now weighs 163, he lost HALF of his weight! That is truly remarkable... There were other amazing stories and weight losses, too... We were concerned when heard the promos for the show because they made it sound like Heather had given up ("only 3 of the 4 finalists will weigh in...")... In reality, she was 5 months pregnant! And, she received a decked out nursery as a surprise! I thought that was pretty cool that they did something for her since she could not weigh in.... The Salt Lake Tribune has more on her story... :-)

So, you want to send e-mail to someone that does not have or use a computer?? Check this out: MyCelery.com offers a printer/ scanner/ fax service that lets you send email to a private address and the printer spits it out... THEN, if the recipient wants to reply, they HAND WRITE the person's name and the service will recognize the name and send the scanned paper! Seriously cool stuff! Another, less two-way version is being offered by HP: It's called Presto. It is one-way (you send, they cannot respond).

I am very excited about Christmas this year! Maybe because I am getting older, maybe less cynical (well, let's not push it...), maybe because in the same year my oldest child gets the 'history of Santa' story, my youngest stares with wide-eyed amazement at anything and everything Christmas... I don't know what it is, but yes, I have the warm, fuzzy feeling of Christmas, and it feels pretty danged good... :-)

My Dad called me last night to chit-chat and to tell me about his new laptop. Sounds like he will have lots of of fun with it, but mostly lots of work... He leaves Saturday, headed for Amsterdam or Paris, then from there on to Kuwait. It turns out, he may be stationed in Kuwait and not in Baghdad, but that remains to be seen... He said the hardest part is all the 'military-related' things they have to learn - like how to whip out and put on a gas mask in under 10 seconds while holding your breath, then getting into the hazmat suit once the mask is correctly in place... He said he finally got to where he could do it in about 8 seconds... Pretty good for an old-timer... (heh-heh, just kidding, Dad). He will have email and he can take pictures of certain things, so we'll see what comes back from "The Continent..." :-)

In my zeal for mailing off videos to winning bidders, I sent the wrong video to someone - which means the person it was SUPPOSED to go to won't get it for a while... Ouch.. Hope it wasn't a Christmas present... :-( I sent email to both parties and hopefully we'll get it resolved PDQ... :-)

Just show I still hold some of my cynicism true to my heart, while looking for something else, I came across a cute little poster: 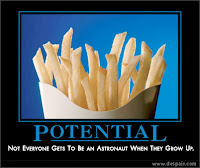 It turns out, Despair.com sells a whole slew of these "Demotivation" posters! Some of them are absolutely priceless... And, if you're really in the mood for a laugh or two, check out their FAQ section (click on questions to reveal answers) and their "Disservice" page.... Great stuff!