I couldn't help but take a cue from Leno the other night and check out some last minute gift ideas... How about a unique ornament idea? And, if you scroll down the page, you'll find other gift ideas, too... Also available are knock-off Chia Pets... And the gift for the person whose dog suffers from flatulence only when visiting YOUR house: Try this less-odorous version... I also thought the funky pacifiers were good to give to new mother... And, how would like to freak out your mother (or father) this Christmas?? Get the tattoo sleeve for yourself and show 'em some love... :-)

Okay, not everything I like to find is rude or crude! How about computer/MP3 speakers for the animal lover? Or, for the person who simply can't get enough "Deal or No Deal??" How about a handheld version? Got someone that is a photo nut? How about a wreath with picture frames?

Now, maybe you're just looking for a diversion or two? How about Simon Sez? You tell Santa what to do... We've told him to dance, sing, rock, ride Rudolph, kiss, and yes, we told him to fart... The only thing we asked that he did not do was stand on his head.... Be warned, the site seems to be getting lots of traffic and may be slow... 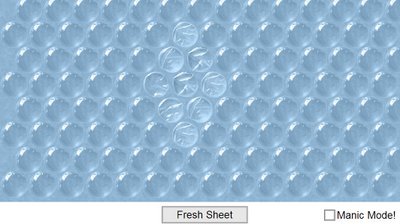 Love to play with bubble wrap? Play with it ONLINE or you can download a standalone version for your PC, and if you're REALLY desperate, how about a PALM version!? Then again, you may be in for something else to occupy some of that holiday dead-time... Maybe you didn't get all of your decorating 'fix' taken care of: Decorate a virtual tree... How about an online sliding puzzle of Santa? There all kinds of things you can do...

For those of you wanting to know, my Dad got the "all clear" to head for England, Kuwait, and eventually, Iraq... Of course, he can only take 50 pounds of things with him, so he bought a new carrying case, which when loaded was more than 50 pounds... Turns out the new bag weighed almost 10 pounds alone! Ooops! So, he took it back and bought something else... Guess we'll see...

Got these in an email, and thought I'd share them with you:

And, while I'm on a redneck/cowboy kick:

An Alabama couple had 9 children. They went to the doctor to see about getting the husband “fixed”.

The doctor gladly started the required procedure and asked them what finally made them make the decision — why after nine children, would they choose to do this.

The husband replied that they had read in a recent article that one out of every ten children being born in North America was Mexican, and they didn’t want to take a chance on having a Mexican baby because neither of them could speak Spanish.

An Irishman, a Mexican and a redneck were doing construction work on scaffolding on the 20th floor of a building.

The Mexican opened his lunch box and exclaimed, "Burritos again! If I get burritos one more time I’m going to jump off, too."

The redneck opened his lunch and said, "Bologna again... If I get a bologna sandwich one more time I’m jumping too."

At the funeral - The Irishman’s wife is weeping. She says, “If I’d known how really tired he was of corned beef and cabbage I never would have given it to him again.” The Mexican’s wife also weeps and says “I could have given him tacos or enchiladas I didn’t realize he hated burritos so much.” Everyone turned and stared at the redneck’s wife. “Hey, don’t look at me,” she said, “He makes his own lunch.”

And one for my techie friends:

How many programmers does it take to screw in a lightbulb?
None, that’s a hardware problem!