Do you enjoy the challenge of repetitive, almost mindless games?  You know what I mean - the games that you keep playing on Facebook or King.com or whatever that don't really challenge you, but you find insanely addictive.

Well, I have found one such game that has been around for a while now and is supposedly getting ready for relase on the iPhone/ iTouch/ iPad format: The Amazing Flying Brothers.  The one thing that confuses me about the whole game is the fact that there are no "brothers."  There's one guy.  Or maybe, each 'new player' is a brother.  These are the things that keep me awake at night. Well, okay, maybe not quite, but you get the idea right?  I digress. 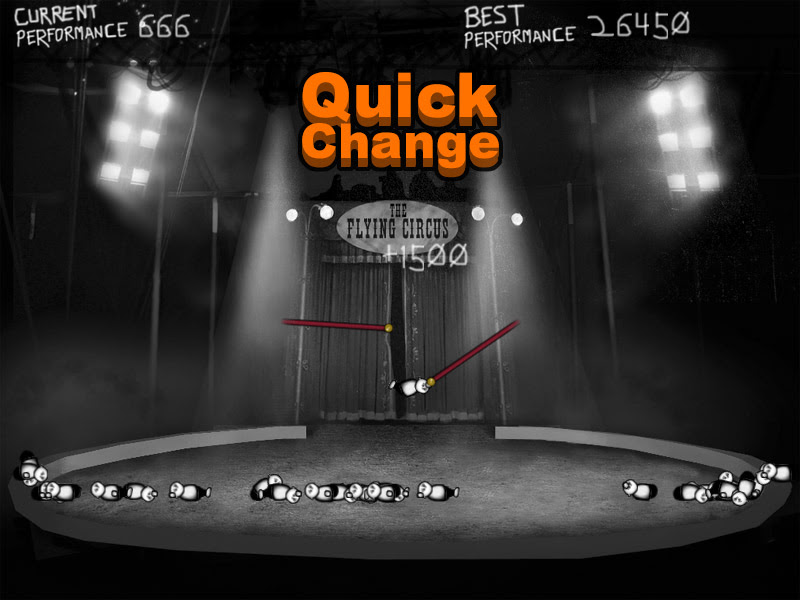 The premise of the game is simple: You have a trapeze artist that swings on one of the 'bars.'  When he swings to a certain point, you click the left mouse button and send him flying through the air (or not, depending on your timing).  The goal, of course, is to have him grab on to the other bar.  He doesn't really grab it so much as run into it, but the idea is the same.
To make the little guy swing harder, you hold down the left mouse button and "drag" him through the air.  For example, as he begins a downswing, hold the mouse button and drag downward.  Through experimentation, I have figured out you can also drag around down in a circular motion to help gain speed.  Let me tell ya, you can get that little guy moving pretty fast!
Then, when you want him to release, you click the button and WHOOSH! off he goes.  Of course, the more flips he does in the air, the more points you get if/when he catches the bar.  I have to admit, though, that getting up the speed and then pushing the button just as he comes down toward the ground brings a gidduy feeling of pure torture as the little guy SLAMS into the ground and skids across the floor.
There are YouTube videos showing folks doing amazing feats and racking up uber-high scores.  I am not one of them. I've barely broken 75,000 and that was only once.  You see, I am addicted to making the guy do stupid things.  And that usually means he's not landing anywhere near the swinging bars.
If you haven't see this yet, you can find a copy of the DRAFT National Education Technology Plan: http://www2.ed.gov/about/offices/list/os/technology/index.html
There are some interesting tidbits in there.  The most reformatory (at first glance, I have not had a chance to read through the whole thing yet) is the move from "seat-time" to "demonstarted competencies"  - that is a move from sitting in class for 8 hours because you have to to moving up through the ranks based on what you can do and what you can demonstrate you know.
It will be interesting to see how we 'teach' in that type of model.  If fully implemented, I see a future where students are no longer placed in 'grades' but are grouped together by skill set.  The students' ages could vary by 3 or more years within a 'classroom.'  This type of environment should also spell the end of NCLB, finally.  Or, at least not hold back those who excel simply because those who are not being left behind are holding back those advanced students.
Perhaps, once and for all, students operating below a certain level will be taught at their level with realistic expectations and will advance only as their own skills advance.  Meanwhile, students operating at or above skill level will learn, explore, and grow at a pace tailored (one would hope) to them.
I'm looking forward to reading what else is in the plan!

Here's a question that has come up recently during a conversation: What is the optical zoom equivalent on a digital camera to that of "normal" human sight?  That is, when you take a picture with a digital camera, at normal (or none) zoom level, everything appears further away and much smaller than what you actually see with your eyes.  So, what zoom level provides "human-level" vision?  I have no idea. I tried searching, but cannot see to come up with the correct wording that produces and answer worth anything.
In case math is needed, here is a sample camera: 4.6mm - 110.4mm (24x optical zoom).  At which point along the 'zoom meter' would I get WYSIWYG photos?
I've seen that 50mm = 1x magnification, but then this also seems to be disputed as much as it occurs as "fact.


Evidently, there is a surplus of new humans.  Or maybe goats.  I'm not sure, and I sure don't want either one.  I have two of each already!  I saw a similar ad at the local Movie Gallery: 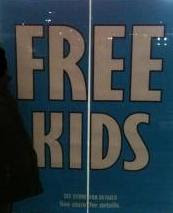 Lindsay Lohan is suing E-Trade over the "milkaholic" commerical.  Seriously. She claims everyone is subliminally connecting her to the name Lindsay used as one of the baby names in the commercial.  Well, if E-Trade would like to hire me as an expert witness for the defense, I'd be happy to show up.  Frankly, I hadn't thought of Lindsay Lohan since her last mention on "The Soup," which even then was quite fleeting.  If I were the judge in the case, I would force Lindsay to prove that no one else in the world has her name and that no one else in the world ever named their baby that.  No, actually, I'd just laugh my head off and tell her to get a life.
If you just have to read the story, it's here:
http://wonderwall.msn.com/movies/lohan-suing-for-100-million-over-baby-ad-1541882.story?gt1=28135

A man claims his Prius had the accelerator stuck, causing him to go 90 mph down a twisting road.  My first thought was, "Wow, I didn't even know those little buggers could go that fast!"  My second thought was, "Yeah, right."  After hearing/watching/reading stories, though, it does make you wonder.
What I wonder is why the guy didn't just kill the car when it started racing out of control?  Just turn it off. Poof. End of story.  Instead, he evidently tried applying the brakes, tried lifting the gas pedal by hand, and eventually was instructed to apply the brakes and the emergency brake at the same time.  After the vehicle slowed, he turned it off.
Okay, future note for everyone out there: If your car starts to speed up uncontrollably, TURN IT OFF! No power = no go.  It's not a hard concept to grasp, really.  Is it?  Maybe so.
(story: http://www.cnn.com/2010/US/03/08/california.runaway.prius/index.html?hpt=T2)
on March 09, 2010