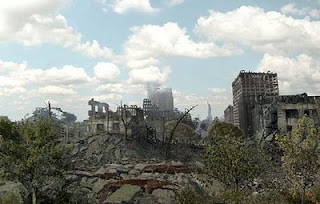 I recently recorded (and finally got to watch) National Geographics' "Aftermath: Population Zero." You can read more about the show here.

Basically, the premise is that all the humans suddenly disappear for whatever reason. That doesn't matter in this tale. what matters is what happens to the Earth afterward. The breakdown of nuclear power plants, etc. The show talks about the carbon dioxide and all the pollutants in the air and water. Animals dying, others adapting, etc.

I thought it was actually pretty interesting. But, remember, this is a NatGeo show. You know, the kings of 'peace, love and many groovies.' You know, the world is falling apart and we have to save it people. Well, here's the kicker... For all the references to global warming and such, the overlying message in each segment was the same thing that I've been saying since 'being green' quit having anything to do with Kermit the Frog: The earth will naturally clean up the messes we leave behind.

At one point, the narrator say something like, "It took humans 10,000 years to try and control nature, and it will take less than 500 for nature to repair it." Exactly. Not only can we not destroy the earth, the earth will repair itself in a whole lot less time than it takes for us to measure our carbon footprints.

Of course, the program ends with, "All we have to do is get out of the way..." One day, we will get out of the way. Whether you believe it will be by some scientific reason or you believe God will sort us out, humans will be gone. So forget your goofy compact light bulbs, your hybrid vehicles, your carbon-reduction-air-ionizer, and whatever other nutty 'green' thing comes up next. In the scheme of things, the earth is much bigger than we are. You know, scientists say the earth is 4.5 billion years old. She's a big girl. She can take care of herself.
on January 22, 2009