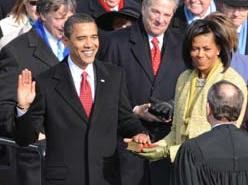 My assistance was being requested even before I walked in the door of the office today. Could we set up a feed to the conference room for the big event? Of course we could - right after I hunted down a video cable and got all the TV equipment in place. Once that was set up, John and I decided to connect the TV in the distance learning room to the cable system and watch things in there.

About a half an hour before the oath was to be taken, we get a call from the local community college. Could we connect our distance learning equipment to theirs so they could view the goings-on in their auditorium? Evidently they had a malfunction and could not get television access to that room. So, we pointed a camera at our television and sent the signal through the pipes to the college.

The phone rings 10 minutes before the swearing in. Could we change the channel to CNN instead? You're kidding, right? Nope. Well, after flipping through several channels, we realize our television is not set up for cable antenna. Why would it be? We don't watch TV on it. We leave it on whatever channel we happened to stop on when trying to find CNN before realizing we weren't going to find CNN....

While looking through email, I find a streaming link for the K12 folks to use within the state network. Out of curiosity, I click on it. The image that comes up is Obama with his hand raised finishing up his oath.

Not that I cared to watch the event necessarily, but, well, I missed it even if I 'had' wanted to see it. And that is the life of a techie.

Many events go unwitnessed first-hand by the people behind the scenes because, well, they are behind the scenes making sure everyone ELSE can see it. I wonder how many of the people in the big jumbotron trucks got to see much of anything. After all, they were most likely focused on making sure the signals were right and that the truck wasn't apt to tip over anytime soon.

As for me, I snagged an image off the 'net and I'll watch the speech later. maybe. I've never watched a presidential speech. I really see no reason to start now.
on January 20, 2009