I spent the week in Hot Springs at the Hot Springs (education) Technical Institute. Basically, it's a conference with lots of vendors who sell to Arkansas schools, and there are break-out sessions throughout the days of the conference where we get to learn about different topics, ideas, etc. Of course, vendors give away free stuff! 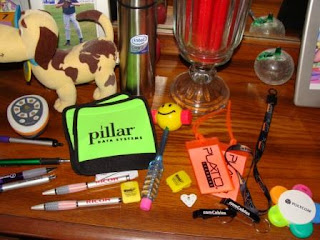 The 'swag' shown in these pics doesn't cover everything, but it covers a lot of it. I also picked up some nice T-Shirts (not the cheapie kind) and even a Plato Polo Shirt! 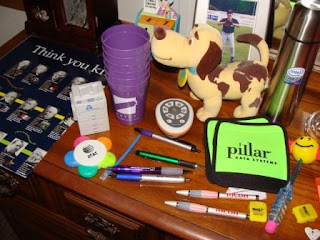 One of the sessions I attended was about Web 2.0 (blogs, wikis, MySpace, FaceBook, etc etc etc) and how those sites can be used for education. I have stayed away from MySpace because of all the bad press, but also because I never really understood the "need" for it. So, against my better judgement, I created a MySpace area. Whoop-die-doo. http://www.myspace.com/davidinark - I created the page, clicked on "home," changed the template there, and still have no idea why the background looks plain white when you use the link I just gave. Whatever. I decided to go at it as if I were a student who was allowed to create a page. Basically, I made everything private and used fake info for the profile. Seriously, I don't understand the hoopla about it. It is 9 billion times more complicated that Blogger or even Sharepoint Wiki's, and that says a LOT when comparing it to Sharepoint Wikis (can you say nightmare in a bottle, boys and girls?). But, really, could someone tell me what the big friggin deal is with MySpace? Tyler said it's when you start connecting friends and stuff that it really takes off. Again, whatever...

But, the important thing is that I am TRYING to understand. Tell me WHY something is important or how it can be used in a positive way, and I'll give it shot... I'll play around with FaceBook (though I think I have one from a long time ago when I first heard of it - I am sure I tried it, went "okay, whatever.." and gave it up). I'll even try PBwiki, and a slew of other Web 2.0 sites that I was told about this week. I'm not sure I'll mess with Second Life, though. I barely have time for my first life, why would I waste the rest of that on a second one??

It is not a matter of trying to be "cool" or "modern" or whatever. It is a matter of trying to see where the kids are, why they are there, and what they are doing. First and foremost, I am seeing what my kids are getting into, or trying to get into, and understand the advantages and disadvantages. Arm me with facts and information, and I'm all ears....
on June 19, 2008