Looking back at... Something

Are you a "graph" person? Evidently, I am not. For the proof, check out the masterpiece I created below: 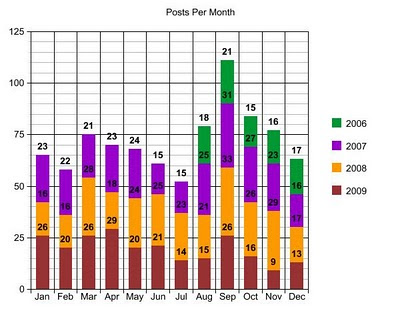 What are you looking at up there? That is a chart showing the number of posts per month for this blog, colored by year, sorted by month. Yeah, did you get all that? The goal was to show something of a comparison chart. I don't really know if that is what I accomplished or not. I started this blog in August 2006, so there is no data for 2006 before August. Looking at the chart, I have no idea what it is telling me, except for one glaring fact: 2009 was a weaker year for posts than the previous years. Look at how small those brownish bars are there!  I actually started out strong last year, but then fell off during the summer and really never recovered.

In case you are as confused by the chart as I am, the numbers shown reflect the bar height for the bar BELOW the numbers.

I considered writing a "Hey, let's look back at what I talked about last year" kind of post, but I decided I won't get off into that unless the urge hits me very hard.  I don't think it will.