Before I get too far into this post, let me say that I will be posting a "Christmas" episode here soon. For now, though, you get to enjoy my current ramblings:

One of the things Shan and I do when we go shopping is to comment on the various "misplaced" items we see during our trip. You know, those items that other people left on shelves, presumably in favor of the item(s) actually on the shelves? Sometimes, we find a shirt on the bread shelf or candy on the fruit roll-up shelf.

Well, today, I decided to bust out the camera in my HTC Touch and snap some of the things we find. I am sure each misplaced item has a story...

First up, we have FOUR, count 'em, FOUR, Banquet Salisbury Steak FROZEN dinners.  My guess is that they are no longer frozen!  Next to those, we have a box of pasta, which I believe is lasagna noodles: 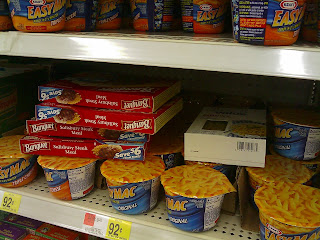 The made-up scenario: Someone decided they wanted to have salisbury steak for supper one night.  This means they started in the frozen section and worked their way BACK to this aisle.  They came down this aisle from the main passageway, bringing them passed the pasta, where they spotted the GV brand noodles.  They picked them up, and just as they were about to place the box into the cart, they saw the EasyMac.  Ahhh, EasyMac.  Mac-and-Cheese in under 4 minutes.  Why mess with steaks and noodles when they could just add some water?  So, rather than carry the steaks back to the frozen food section (which they have to pass anyway in order to get to the check-out), they simply dumped their goods here.  The real question is whether or not a store employee does the right thing (throws out the now contaminated food) or the wrong (returns the food to the freezer)....

Up next, we have something of a mystery in the baked cookie area: 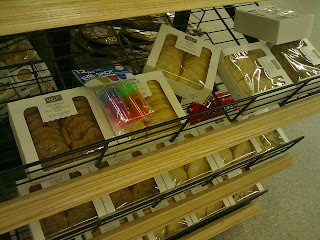 The colored cups are mini plastic shot glasses.  Someone had been planning a night of drinking games.  The red you see on the shelf below is cherry or strawberry soda.  It's hard to say if that was part of the same basket or not, but for the sake of the story, we'll assume it was.  So, the shopper has already been drinking and now has the munchies.  She puts the shot glasses down in favor of some cookies.  Why "she?" Because no real man would pick up colored shot glasses!  Panic strikes as she can't decide WHICH cookies to grab, and thus a torrent of box-slinging yields the mess you see, boxes lying askew all over the place.  At this point, she is so mad, she not only puts down the box of cookies, but realizing that she no longer has the shot glasses in her cart, she puts the bottle of soda on the shelf below the cookies.  She tries to hide the item, afraid someone might catch her.  Hurriedly, she walks away confused and empty-handed.

I almost didn't take a picture of ths last one, but just couldn't resist: 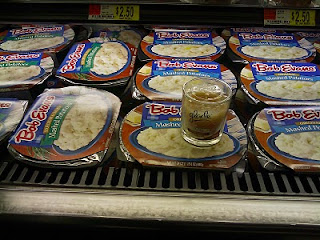 What could the possible connection be between pre-made mashed potatoes and a Glade candle?  I had to know.  Let's go to the (mock) videotape...  We see a man pushing a cart full of various groceries and other items.  He has a list that he glances at every once in a while as he shops.  He rifles through several candles before choosing this one to toss into his buggy, then he uses a pen to cross an item off the list.  As it turns out, this is the LAST of the Glade candles.  He finished his shopping and is headed toward the check-out when he spies packages of pre-made mashed potatoes.  He glances at his list.  He starts counting oon his fingers, presumably adding up the cost of the items in his cart.  He stops, picks up a package of taters and reads the label. He turns the package over and reads the back.  Glancing into his buggy, he reaches in, snags the candle, then places it on top of the other packages of potatoes.  Smiling and nodding, he drops the treasure into his cart and wheels himself toward the checkout lanes.  He can always tell his wife they were out of the candles.  After all, that *was* the last one anyway.
on December 27, 2009