As usual, here are a few of the things bouncing around between my ears as of late:

The first is a reply I gave to an educator that has just started creating her digital footprint. That is, she is just now joining online sites such as WordPress, Facebook, Plurk, Twitter, etc.

I know many of you like to have context, so my reply (below) was in response to this post: http://debsdebits.wordpress.com/2009/12/22/social-networking-cautiously-getting-started/


I also too a log time before jumping into Facebook, Twitter and the like, though I have been blogging before there was such a thing. I think the essential phrase is "Professional Learning Community." Facebook is not solely one, not to me. It's a place to hang out with friends, talk about whatever, though there are professional organizations on there for sure.


I'm sure there are folks on Plurk that are not educators, but I haven't found them yet. And that is what I love about it. I not only choose whom I follow, but who can follow me. Yes, sometimes we get into the 'banalities' of life, but more often we have amazing discussions about education, technology, blending the two and more.


As you said, the key is always (or at least often) remember that everything is added together to build a picture of oneself. I tend to be the class clown with nuggets of (hopefully) useful tidbits thrown in.


The biggest 'bonus' for me about PLC (or PLN, if you will) is that I can toss out a question and generall within minutes have suggestions from around the world, all from people *I* trust...

Jess and Nick (Shan's sister and brother-in-law) have been telling us about this place called "The Ironwood Grill."  Yesterday (Monday), Shan and I decided to go there for lunch.  The place is not easy to find and how anyone finds it without first being told about it boggles my mind.  It's located in Texarkana, TX just off Richmond Road.  Basically, pass the Sonic and keep going to the next light (I believe).  There, one will find a series of fitness centers on the left.  Down the road to the left, there is a wooden house-looking building.  That would be the Ironwood Grill.

We got there a little after 1pm and had to wait 20-30 minutes for seating.  That seemed a bit much for a place that was not easily found.  I will say, though, the parking lot was full.  There were empty tables as we waited, but they seemed to be short-staffed.  Perhaps they did not anticipate so many people being off this week for Christmas.  Who knows.

The inside is pseudo-rustic with iron ornaments around the place mixed with wooden designs. I say "pseudo" because it does not look like you are stepping into something out of an old movie or TV show, but rather like you stepped into a restaurant that someone had thrown up with stuff on the walls.  That is not a complaint or a negative, just an observation.  The place was surprisingly quiet once you got seated.  The waiting area is small, and with the tin and wood and iron, sound bounces all over the place and you can barely hear your name being called over the conversation of other waiting patrons.

Their menu (which can be found on their web site) offered an array of choices: steaks, various fish, veggie plates, sandwiches, and more.  Shan and I both opted for the Turkey Bacon Cheddar sandwich.  We ordered their "queso" as an appetizer.  The chips were warm and crispy - nearly perfect!  We added salt, though the chips at the bottom of the pile had been dusted with what appeared to be sea salt.  The top chips had no seasoning, which is why we added our own.  The queso was bland despite having onion and some kind of green stuff (cilantro, parsley, something) in it.  I'm not sure what the cheese needed but it was missing something for sure.

We waiting an insane amount of time considering we just ordered sandwiches, but it was worth the wait.  My only complaint about them centers on the fact that the menu's description made no mention of tomatoes or lettuce.  That would have been handy to know so that I could've told the waitress to hold the 'matoes.    Other than that, the sandwich comes on a grilled flatbread wrapped around a healthy serving of turkey, a couple strips of bacon, and a lot of cheese.  This was topped with a tangy bbq sauce.  I even ate most of the tomatoes and lettuce.  Yes, it was that good.  The plate also featured a pickle spear and chips.

Our waitress did a great job of keeping our glasses filled, too.  That is a huge plus for me, as I can easily down my own pitcher of sweet tea.

So, if you're ever in Texarkana and want something sorta rustic, but with great flavors, head to the Ironwood Grill for sure! 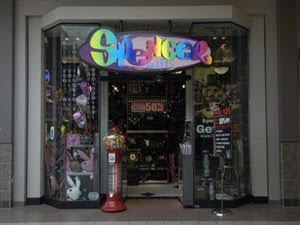 Shan and I went Christmas shopping after the Ironwood.  Eventually, we made it to the mall where Shan hunted for items for her brother.  As we passed Spencer Gifts, she asked me about it.  She had never been in one before.  I grew up with Spencer Gifts in every mall I ever went in, so I am accustomed to some of the things they sell there.  If you are not aware, Spencer Gifts sells a mix of movie-related items, usually quite bizarre (like a life-sized Chucky doll), and a mix of adult-themed items.  As we entered, the first item hanging on the rack was a T-Shirt with a list of things for Christmas.  The first item on the list involved a very intimate act which is oral by nature.  Shan's eyes grew to the size of grapefruits and her mouth hit the floor with an audible THUMP.

Now, even though I had been in Spencers many times before, even I was not prepared for some of the very vulgar items for sale.  I don't think many places would display drinking glasses, t-shirts and the like with the "F dash dash dash" word on it.  They were here for the taking everywhere you looked.  We quickly made our way through, hoping to find some cool movie poster or figurine or something.  No such luck for the movies Casey likes (Rat pack-era), which really surprised me.  A lot of Bob Marley, Jimi Hendrix, and Marilyn Monroe in addition to the horror-film items, though.

As we walked around looking, the expression on Shan's face changed from shock to disbelief and back again.  I had a blast watching her and listening to her amazement at the wares, games, and gadgets on display!

Now, as a good husband, should I have at least warned her?  Of course, but where is the fun in that!?