Saturday in the park

No, it wasn't the fourth of July, and well, really, this post is more about Saturday than it is about any park.  Actually, it's not even about a park.  I could have just as easily titled it "Saturday Night Fever," but then that would have sparked a discussion about fevers, of which I have none, so even that would not have been totally accurate.  Are you with me?

Kay and Linda (Shan's Mom and Aunt, respectively) had tickets to attend a fund-raising event for Rep. Mike Ross with special guest President Bill Clinton.  Shan wanted to do some shopping for Emily, so we all piled in the van and headed to Hot Springs (which is then a discussion about Hot Springs National PARK, and thus, there *IS* a park in the post.  Thank you, thank you very much. Uh-huh!).  The event was at the Convention Center, and I had been there this summer for a distance learning conference.

On the way up there, Kay mentioned something about a band.  I said that I had read Jeff Madlock's Facebook post about having two gigs 100 miles apart and wondered if his band was playing for the shin-dig.  Jeff is the technology coordinator for Hope Public Schools, and is one of the most versatile, and crazy, guys I have ever met.  Was it his band?  Read on to find out.

Between the dropping off and picking up, Shan, Emily and I headed for shopping.  First, we made a stop in at Ci-Ci's Pizza for supper.  I am a big fan of Ci-Ci's!  It's been a LONG time since I had eaten there, so we pulled in and grabbed a bite.  If you have never experienced the place before, it is a buffet pizza place.  No menus.  You go in, pay, and eat.  No servers to deal with - just pizza and the best desserts ever!  Hot cinnamon rolls things, brownies... Oh, yeah.  They create all kinds of pizzas, so you never know what's going to be on the buffet and not everything is great (to me anyway).  Shan tried a chicken alfredo pizza that she didn't care for, and I tried a taco pizza that was actually pretty good.  Of course, they had cheese, pepperoni, supreme, and who knows what else - all for the eatin!

While we were eating, we watched the Arkansas Razorbacks on TV score a touchdown.  If you saw or heard, you know that we lost to the Gators by a field goal.  Some would say that is a disaster.  I say that's pretty dang good, considering the Gators are #1 and everyone in the world thought the Hogs would get their butts handed to them.  Instead, Florida struggled to beat us.  It's one of the rare times when you can feel okay about a loss.  At least, in my book.

After we ate, we hit the mall.  Emily picked up some very cute boots with fur on the top.  They also have silver peace signs on them.  Emily is BIG TIME into peace signs.  I hope this doesn't mean she is heading down the path of "peace, love and many groovies."  Basically, I'd like her to steer clear of anything remotely akin to "Jenny" in "Forrest Gump!"

We shopped around some more, stopping by the Hallowen shop to find a costume for Emily.  Somehow she decided she wanted to be Daphne from Scooby-Doo.  Holy crap, she *IS* heading down that road! LOL!  We couldn't fins a costume in her size, but I did manage to find a "King of Pop" costume kit.

I have ben debating whether or not to dress up as Michael Jackson for Halloween.  I would love to do it as both a tribute to him and for the goofy fun of it.  My biggest problem is one of appropriateness.  Is it right to dress up as a guy with peculiar behavior when it came to children in general?  Then again, people dress up as Jason, Freddy Krueger, and even the clown from Saw, so, why bother going down that road, right?  If I decide to dress up as the King of Pop, I'll be sure to have pictures taken.  If I am going to scare local kids, I might as well scare the rest of you with it, right?

Emily picked up a Bobby Jack sleepover monkey.  She made a deal that if she got the monkey, she would have to sleep in her own bed (she likes to crawl into bed with us during the night).  We gave her a "fre night" for Saturday, but starting tonight, all bets are off.  It is going to be a very tough time for Emily and Shan. Maybe I shold have picked up a monkey for both of them. 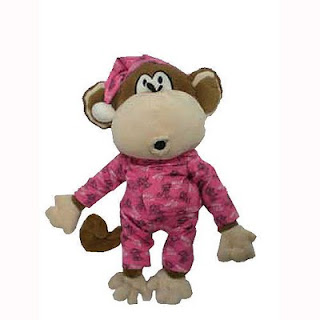 We piddled around for a bit and then decided to make our Wal-Mart run while we waited for Kay and Linda to call us back.  Of course, we got the call at about the halfway point in our grocery shopping.  Luckily, they weren't in a hurry to go, but just wanted us to know that they were ready whenever we were.  We finished our shopping and headed back to the Convention Center to pick them up.

Kay got some great pictures, so I am hoping to borrow them and post them here later.  Whether I am fan of Bill Clinton (and/or Mike Ross) or not really has little to do with my wanting to post the pictures.  The fact that Clinton was one of Presidents is the main reason.  Politics aside, I think it is very cool when someone you know gets that close to a former leader.  Of course, Shan has a picture of her with Clinton from his Governor days and she was part of Girl's Stae or some school-related program.  Maybe she was a Page or something.  Well, hopefully, she will enlighten you when she reads this and leave a comment to set me straight.

And, as for Jeff playing at the Ross/Clinton event.... Yes!  It was his band there.  Kay said she went up to him and asked if he was Jeff.  When he said yes, she asked if he knew my name.  He asked Kay if she was my Mom.  "Even beter," she said, "I'm his Mother-in-Law."  That is funny!  Here is a photo of Jeff I found online, but it pretty much explains it all: