"Could you shut down your production server for me?"

Those were the words spoken by the Dell tech support guy as we tried to troubleshoot a problem with a tape backup unit we have. My simple response was, "uh, no."

Sure enough, the tape unit booted up and I was able to eject the tape that had been stuck for more than a week. Then, for good measure, I also ejected the second tape (it's a dual tape unit). Once that was done, I plugged everything back in, tightened down all the connectors, and fired the tape unit back up. Once I inserted the tapes, everything worked just fine.

And I did not have to shut down our production server, thank you. 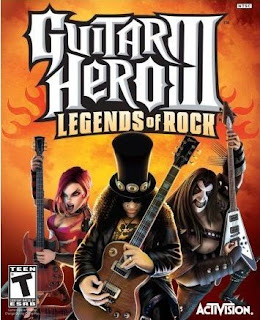 Emily has been on a major GH3 kick lately. So, Sunday night, she got Shan to play and Shan did very, very well! She had never played before and scored 97% of the notes for "Hit me with your best shot!" Rockin!

And, in the name of honesty and disclosure, Shan kicked my butt on a variety of songs. I'm going to have to practice...

Emily is getting better, reaching just over 50% on "hit me" and in the upper 40%-range for several other songs on the list! Her main issue is that her hands are a tad too small for the fret board. But she hangs in there, and doesn't give up easily. Soon, she'll be blowin the roof off the place!

Tyler does very well on medium and hard. He treats the game like a game rather than a music challenge, so for him it is more about hand-eye coordination than matching riffs to the song. I may need to try that....