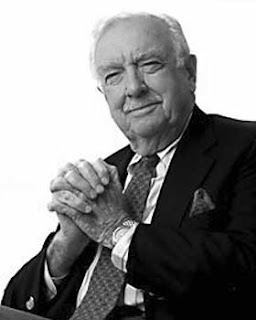 In truth, I do not remember any specific broadcasts. I wasn't born yet when Kennedy was shot, and I was all of about 3 months old when we landed on the moon. If Cronkite had anything to do with coverage of the 1986 shuttle explosion, I don't really recall. Why bother writing anything then? Two reasons: first, because he is ultimately part of the reason I even thought about broadcasting as a career choice, and second, his presence in our homes was so evident that I ultimately developed an imitation of him.

When I was a kid, Mr. Walter Cronkite appeared on our television screen nearly every night so far as I can remember. We was on so much, in fact, that I had developed a knack for imitating his voice and signature nightly closing. I'm not sure how old I was, but I could not have been more than 5 or 6 when I started and probably 14 or 15 when I stopped (though every once in a while, family members would still ask me to say "And that's the way it is"). Even though I do not remember any specific newcasts, Cronkite was the man we looked to when the world seemed out of place or when the world was celebrating something big. As strange as it may seem, I still manage to throw in a "that's the way it is" when listening to the radio. I had done since I was a kid, so for me, it is just something I do.

When I went to college, I eventually followed the path of radio broadcasting. I eventually became the new director for the college station, and Walter Cronkite was a part of everything I thought news should be - even for a tiny 10-watt radio station. Our job was to report what was happening as concisely as possible, as humanly as possible. And, for a time, we had all of 91 seconds to do it in. Our frequency was 91.1FM, so I came up with the "91 seconds of news" tagline. I don't think it lasted long, though, because there was just too much to say.

While doing the on-air portion of the broadcasting class, I always played the straight man to whatever partner I had - whether it was my brother, "Toucan Sam," or my good friend and co-station manager, Mark "Eddie Wish" Walker. That is not to say I didn't have fun and try to keep things light and fun whenever I could, but I saw our positions in the light that I had grown up with Walter Cronkite in my living room. That is, when it came time to inform our audience, we did it with as much integrity we could gather. Remember, this WAS a college radio station, so we were doing all kinds of things and had all kinds of personalities that shined through the microphones and speakers.

There people in each of our lives that seem to serve as the foundation of particular aspects of our personalities and our beliefs in the way things should be done. For me, Walter Cronkite showed me what kind of broadcaster I wanted to be. And even though life has taken me in very different directions, there are many times that I will be driving down the road, listening to the radio, and I will do my own song introductions and my spins on the news as I listen along. And, even as recently as last week, I can remember listening to a local news story on the radio, and jokingly added "And that's the way it is" after it was over. I will miss him deeply and dearly.
on July 19, 2009