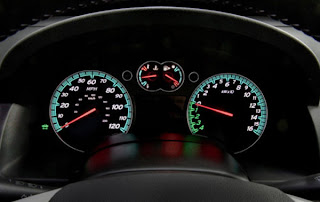 During my recent trip to Chicago, Doug (one of the guys I went with) and I decided to take a trip to South Bend, Indiana, to see the University of Notre Dame campus. He's a big ND fan, I guess. I went along because I figured it was the only time I would be anywhere near there, so why not take a few pics?

We have a general idea as to where we're going, but I bring along the EeePC loaded with "Streets & Trips" and my USB-powered GPS unit attached. As we head down the highway, I grab our current position (after a few tries - frankly, there should be a simple option in S&T for "Use My Current Location") and then type in "Notre Dame University." After a few moments, turn-by-turn directions and a map of the route we are supposed to take appears on-screen. Great! Off we go!


Fast-forward to South Bend, as most of the trip is uneventful except for the horrid amount of road construction going on.

There are signs for the University of Notre Dame all over the place as you get close to South Bend. Once you exit, you are greeted with various signs. None of these signs specifically say, "Visitor Parking." Instead, they say things like, "RV Parking" and "Game Day Parking." And those signs point AWAY from the ND campus to boot. That's okay, I've got my trusty EeePC showing us where to go, right?


Wrong. We follow the GPS past several campuses, including what appears to be the main entrance to ND. We keep on trucking and wind up in downtown South Bend, staring at some non-descript two-story building. There's not even a sign on it to let us know it has anything at all to do with Notre Dame.

We decide to go back and follow those "Game Day" signs and see where they lead. Naturally, they take you away from campus, around the big rock in the river, over the river and through the woods. Eventually, you end up on the BACKSIDE (and I use that word in all of its wondrous meanings here) of the ND campus. We finally pulled in to what appeared to be some kind of "Visitor Parking" because everywhere else required a permit. Frankly, finding our way around the streets and lots there was a pain in the butt. I wonder if other people have as much trouble as we did.


So, we toured the campus, took lots of pictures, and then made a fatal RIGHT turn in our adventures. At the ball fields, there was a LOT of construction going on. So, what could have been a short leisurely stroll down a road to the LEFT, we hung a right and ended up walking more than a mile out of our way (all tolled) in order to find our way back to the parking lot. Granted, it was a nice view of the outskirts of campus. But, it was hot and humid, and well, neither Doug or I are in any shape to walking around dodging oncoming cars and weary glances from passersby.


We get back into the car, and head for Mickey D's to grab a bite and a restroom break, then off to Chicago (well, technically Schaumberg). As we pull out of town, I look over and ask if we should stop for gas, seeing the gauge perched just above the "E." Doug assures me that we have plenty of gas to get back to the hotel, but that he'll stop once we do get back. So, we drive on.

As we come into the outskirts of Chi-town, Doug begins pressing on the gas pedal and wonders out loud about the quality of the manufacturing process of the vehicle. Since I try to keep this blog in the G/PG realm for the most part, I will let your own imagination fill in the various three- and four-letter words he used in describing the vehicle and the issues we were having. We are also in the far LEFT (i.e, FAST) lane...

At this point, I casually say, "I'm pretty sure we're out of gas..." He points to the dash and says, "No way, Dude, there's like half a tank left!" I tell him that what he had been viewing as the GAS GAUGE was actually the TEMPERATURE GAUGE and the gas indicator was the other one. Note the GAS indicator is on the RIGHT...

As we begin to slow down in the fast lane, traffic is screaming by us. We cannot find the stupid HAZARD indicator, so Doug puts on his signal and we attempt to cross multiple lanes of traffic with NO GAS!

Let's just say that in addition to the throng of vehicles whizzing by, I also saw my life whizzing by me. I am pretty sure that I closed my eyes at some point.

By the Grace of God alone, we managed to get ourselves onto an exit ramp shoulder, just around the curve from where everyone else was coming off. Yes, we were in a blind spot. And we were out of gas. Near Chicago. Without a clue.

Doug called Avis, who told him he was out of luck and that refueling was not part of the rental agreement. Once he expressed his immense dissatisfaction with their customer service, he opted to phone-a-friend. An ex-coworker/longtime friend of his said she was in a meeting but that she would come as soon as she could get away. So, we waited. We watched as cars, semis, buses, you name it, came screaming around the corner and rushing by. There was very little space between the driver's side of the car and the freeway exit.

After about five minutes or so, a trooper flicks on his lights and pulls in behind us! Once the coast was clear, the officer came to my side of the car and asked for Doug's license and asked if we had called in our situation. We assured him that we had not called it in, and he disappeared. A few moments later, he came back and let us know that HELP was on the way. It turns out, you can call *999 in the Chicago area and a big yellow truck will come help you, for a small fee.

Not too much longer after the officer had returned Doug's license, a big yellow truck pulled around the corner just after the officer sped away in his vehicle. Doug phoned to let his friend know we were being taken care of - at $5.00 per gallon for two gallons of gas.


Once all the paperwork was done and the gas was poured in, we thanked the truck driver and headed to the nearest gas station...

*I thought I should note that the images of the dashboard above were obtained online from somewhere... Notice they evidently had trouble reading which was the FUEL side, too - they are nearly on empty!! Too funny!
on June 23, 2009

Email ThisBlogThis!Share to TwitterShare to FacebookShare to Pinterest
Labels: notre dame, out of gas