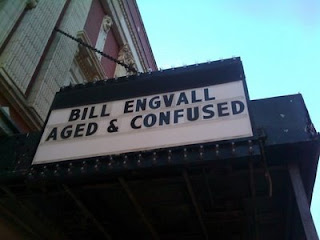 After the Cubs/Indians game on Saturday, the three of us hopped in the Equinox and headed for the Vic theater. Not being from the area, we could have just as easily been looking for Michael Jordan’s house -if he even lives in chi, which I have no idea. We got directions from a local young man -perhaps 18 or so- but he seemed very confused as to where he was in relation to the Vic, so we discredited his advice and went with plan b. We asked the parking attendant. As you might have guessed, this yielded nothing more useful than a shrug and a tip that we might want to find a local law enforcement officer and ask for help. Yay.

Our phones were of little use, since none of us has GPS. We do have internet, though. We are able to find our way around and eventually end up in a parking garage that was built such that the only vehicles that could easily and safely navigate it would those produced by the cooper mini company. At one point, as we tried to go up into the garage, oncoming traffic had to back-up, maneuver their vehicles as far to their right as they could, and then we did a very tightly choreographed dance which let both vehicles -ours and theirs- squeeze past each other, with barely room for side mirrors not to touch.

We arrived very early (which seemed to be the theme of the week) so, we grabbed an order of mozz sticks and some cokes. We assured the waitress that after the show, we would be back for "real" food. (For the record, we did go back and had some killer pizza!)

Standing in front of the Vic were various tbs stations. That is, places where you get free Twix, have your picture taken with cardboard stand-ins, and you could make a mix of beats, scratches and laughs. The three of us had our picture taken, though I was the only one willing to act like a fool for a fun shot. 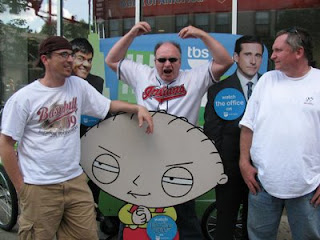 After a lot of coaxing, Will finally agreed to jump on the mix-master machine. The tbs photog snapped a lot of shots. I think will may become the poster-child for the laugh-traxx machine.

Once the line started moving, we were ushered in to find our seats. It is here that I would like to mention that all the tickets, yes ALL tickets, were general admission. We found a nice comfy padded elongated sitting place. Sure, some might call it a very long couch, but I am sure it some more sophisticated name. We sat right on the aisle. This was done for two reasons - 1)we had a great view of the stage, and 2)the show was being recorded. Where else is a handi-cam going to go but up the aisles? Exactly! 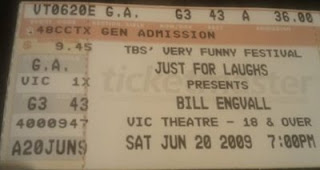 Remember the part about general admission? There was a section of seats that was roped off, reserved for tbs folks that had come in for the show. Several people came up to the person in charge of keeping the public out of there and asked her if they could sit there. I'll get to that in a minute. By far the most asked question was: can you tell me which section I’m in? Or, where do I sit? We helped the woman out by introducing several folks to the concept of 'general admission.' For those that don’t know, general admission means you come in and find a seat, then plant your tukus in it. :-) Of course, we had joked that the next person to ask was going to be told that they needed to go ask the security guard at the front for the general, and ask for general ad mission. Luckily for everyone involved, no one asked us after we decided that.

Now, back to the bonehead, er, patron that kept bugging the poor girl guarding the reserved seats. One guy came back every 3-5 minutes asking if he could get a seat in the reserved space. The girl said that seats would be open to general admission once the tbs folks had all arrived. This did not deter the doofus, er, gentleman, from trying to slip the girl a 20 dollar bill! Holy crap! He just tried to bribe his way into front-section seats! Now, these seats were right next to us. The real kicker? He already had front section seats on the other side of where we sat! What a jerk! And, to add insult to injury, he was wearing a shirt which read: "Stop your whining, B*** and get over it!" Of course, the word was spelled out. The three of us finally started reading his shirt out loud to him, but he never made the connection. Moron. Thankfully, it ended up being an all-TBS section.

The show itself was absolutely hilarious! I thought it was going to air next weekend on TBS, but that's not what this was being taped for. It was being taped for his own production company, which I can only assume means that a a comedy special or DVD is coming out of it! That would be cool!
on June 22, 2009