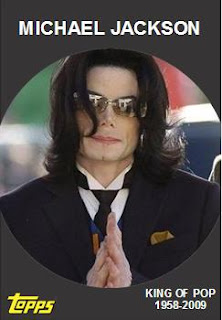 I am 10 years younger than Michael Jackson, so by the time I can remember things like "Rockin Robin" and "I Want You Back," Jackson was already well on his way to super stardom. By the time I was seven or eight years old, he was 17-18. Other than hearing his songs on the radio, though, I really didn't "discover for myself" the amazing talent that was Michael Jackson until I was in junior high school.

I specifically remember all the hype surrounding this 'mini-movie' that was being released. Television was touting the release of a 14-minute music video. FOURTEEN MINUTES!? Are you kidding me? And then, Jackson changed the world of video entertainment forever. "Thriller" was the most amazing music video I had ever seen, and I was hooked on Jackson from that moment on.

During my freshman and sophomore years in college, my obsession and adoration of what Michael Jackson was doing musically took the form in way of things like a white fedora. I had a felt white fedora like the one he wore in "Smooth Criminal." I wore that hat everywhere, even getting kicked out of a club in Virginia because I refused to take it off.

Over the years, as Jackson's personal life became more and more tumultuous, I made the conscious decision to support and enjoy him as the entertainer that truly was "The King of Pop" while reserving judgement of his personal life for others to handle. There is no doubt that he had a very different view of things, and the fact that he settled his cases for money reflects badly on all parties involved. If my child had been molested, I can assure you that NO amount of money would shut me up. To me, it's obvious that 'something' was going on, but the definition of that is something that will probably never come to full light. In my opinion, I don't care to know.

As I have got older, my obsession has waned, but my admiration for his talent remains as strong as it has ever been. I never had the good fortune of seeing him perform in person, and it is one thing on my own 'bucket list' that I will never be able to cross off. The world has lost one of the greatest entertainers in history. Whether you like him, dislike him, like his music or not, you cannot deny his impact on music, video, and concert entertainment on a worldwide scale. His impact will be felt for lifetimes to come. He will be missed for generations.
on June 26, 2009