Things that make you go hhhmmm...

Yeah, dorky title for a post, but what can I say? It fits me sometimes. Basically, I haven't written for days, and I've noticed that I don't really feel the "pull" to write as much as I once did. I'm sure that has a lot to do with my Indians baseball cards blog, or maybe it just has to do with my Internet-A.D.D. Whatever the reason, I appreciate you checking in to see what kinds of things have popped into my head recently. Today, since I am home with a sick child, I figured I would play a little 'catch up.' 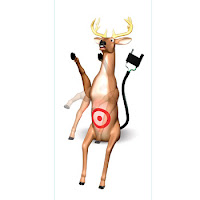 While stopped at a traffic light the other day, I saw one of these deer motion hitch covers on the back of the truck in front of me. Basically, when the guy puts his brakes on, the deer waved his front legs (which actually made it look like he was running vertically - very bizarre). I don't know about you, but I think there is a redneck joke in there somewhere.... If you just HAVE to have one, you can get them (here).

Emily wrote a note the other day and left it on one of the nightstands with some money on top. She said, "There's a letter for you." Her letter read, "Yol can share these moneys." In case you need help, "Yol" is "Y'all" :-) It was very cute! And, Shan and I got to split about 18 cents between us. 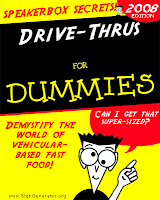 (created from http://www.signgenerator.org/books/dummies/)
After a trip to Wal-Mart last week, we stopped by Dairy Queen for a snack. The wait time for them to give us our stuff was extraordinarily long, so Tyler and I started joking about a "Drive-Thru for Dummies" book. It occurred to us that there just might be people out there who haven't quite figured out the whole drive-thru thing. Somewhere out there, people may be driving up, ordering a burger, then driving around again, to order the drink, then once more for the fries. These poor folks don't realize they could order everything at once! 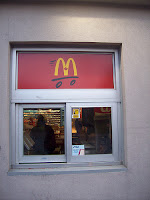 Speaking of drive-thrus, after Tyler's appointment, we drove through Mickey-D's for breakfast. When we pulled up to the window, our food wasn't ready so we were told to pull up. I'm glad there was already a car in front of me. See, at McDonald's, they have to keep the time you spend at the window to a minimum. If they tell you to pull forward, they can stop your time because technically, you are not in drive-thru anymore. So, when the girl told me to pull forward, I gladly said, "Sorry, you already have a car in front of me. I think I'll wait here." Oh, man, was she mad! Heh-heh...

Have you seen the "scare tactics disguised as scare tactics" called "USA Wake Up?" In the name of fairness, the site can be found at usawakeup.org. I recommend you watch the video (assuming you have 20 minutes to wait as it downloads at a whole 7k per second), just so you will know where my references come from. Anyway, I don't believe in all this "rule by fear" or "scare the crap out of everyone in the name of isolationism" baloney. One of the funniest things in the video is something about a million immigrants coming into the country and how we need to shore up our borders, etc. Look, ILLEGAL immigration is a problem, and yes, I believe we need to get those who are here ILLEGALLY out of here. But, this country was founded on IMMIGRATION - legal immigration. Yes, there may be a million immigrants who have earned their way into American citizenship per year, but they EARNED it. They are here because they want to be and because they followed the rules to be here. Shutting down our borders to legitimate immigrants is a huge step toward isolationism. Do we need to take care of the problems in our country? Of course we do.

I don't believe we should be in Iraq, fighting their civil war. I do believe we should continue hunting down Osama Bin Laden until he is found. I believe we spend way too much money feeding foreign countries when we have our own citizens who not only have nothing to eat, but also have no where to live. It is insane that the Gulf Coast still has third-world housing. I digress.

The video (and site for that matter) likes to scare people into believing that all Muslims (that is, all "true" Muslims) can be nothing but radical Islamists. One of the funniest things I read on the site was this: "They may appear peaceful in a public forum, but they speak a different language and show a complete different face when inside their mosque retreats." Why is that funny? Uhhh... Anyone been to large east-coast cities lately? Or how about many southern or western states? What do I mean? How about families that speak English in public, but (GASP!) they speak Polish or Italian or Yiddish or whatever when behind their closed doors or in their churches? How about Spanish-speaking families? Are they radical Hispanics because they speak their own language behind closed doors?

The author of the site says, "The purpose of the introduction movie clip was to get one's attention, not to scare you. It is all based on fact and probabilities." There is a difference in INFORMING someone and using a video with explosions showing the Statue of Liberty falling to pieces. Not trying to scare us? Oh please, that is the only thing the site *IS* trying to do.

I'm all for people making their own decisions based on what they read. So, with that, I recommend you read what you want. If you visit the site and it freaks you out to no end, take a pill and calm down. Remember, for every side of every story, there is another side. And in this, there is a more sane side.