I saw a commercial for the upcoming movie, "Funny Games" about a couple of white-bred kids who take over a neighbor's house and torture them. As soon as I was the commercial, I fired up my EeePC to look up the original film. As soon as I saw the commercial, I knew I had watched that very film a few years ago. Sure enough, "Funny Games" is an Austrian movie done a little more than 10 years ago (1997). The kicker is that the remake is a 'shot-for-shot' remake. If you remember the recent 'Psycho' s4s remake, it flopped. So, will this movie flop, too? Probably. Why? Because it is the same movie with same ending and everything. So, save yourself the cost of the theater ticket and rent the original. It is a suspense-thriller for sure. 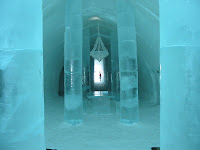 I have been battling 'the crud' for a few days now. So, today, after helping to clean the house, I mainly watched television. Shan and I hung out, and watched a really cool show about this Ice Hotel in Sweden. They build it every year out of ice and snow, then it melts away in time to start all over again. Each night will set you back only $540 to sleep in the ice cold rooms. Want more info? www.icehotel.com

The love affair with the EeePC continues. I really like the computer, and switched over to the Advanced Desktop mode, which basically makes everything look and act like WindowsXP. The Easy Mode is great for folks that want the simple tabbed interface to get to their stuff, but I'm little too geeky for that. :-) So far, I also loaded LxDoom, which lets me play the classic 1st person shooter "Doom" on it, and with a small hack, I play it taking up the full screen of the Triple-EPC. It also turns out that the Advanced desktop gives users access to a lot more applications, too. I am looking forward to bringing my Indians All-Time Uniform countdown database onto the EeePC and see how I like it. I am also looking into software that will help students and teachers use this thing to it's maximum and beyond. Should be cool, and I'll keep you posted!
on February 23, 2008