Coming to you from 3epc 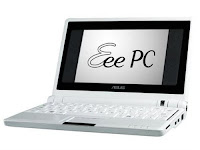 No, it's not the name of some new Star Wars character. 3ePC (actually,it's Eee PC) is a very small, ultra-cool laptop! During a recent meeting with my boss, she suggested I buy each member of the tech dept an EeePC so that we could use it, learn it, and train teachers how to use it for their classrooms. The real kick is that the units were a complete surprise to the other two in the dept! John was out today, but Marilyn jumped out of her chair when I brought hers to her desk! I wanted to get her the pink one (she said during an earlier conversation that she wanted a pink one), but the vendor I used did not have pink in stock.

If you recall, it was about a year ago, maybe, that I got a Q1 UMPC. While I like it alot, the major drawback to the model I have is NO KEYBOARD. The EeePC has a built-in (albeit VERY tiny) keyboard, as shown in the picture. The 3EPC has built-in wireless networking, wired networking, 3 USB ports, and a webcam! This thing is small. It has a 7-inch screen with two vertical speakers on either side of the actual LCD. I'd say the whole unit is roughly the size of a portable DVD player. One thing this tiny ($399) laptop does not have is an optical drive. Since it runs on a modified,very user-friendly, version of Linux, not having a CD drive is not a biggie yet.

Now, we could put XP on it, if we wanted to, but the easy-to-use interface will appeal to many folks. It comes with web browsing (duh, that's how I'm writing this now), OpenOffice (applications that run, act, and smell a lot like Word, Excel, and PowerPoint), some very cool educational programs for science and math, a media player for videos and music, and a host of other tools that even young users or technically challenged users can operate. Did I mention it has a webcam built into the cover just above the screen!? And an SD card reader. Very cool!

I can't wait to keep putting this puppy to the test. I have already added a piece of software called EasyMode Editor, which lets me add icons for programs I install. I am new to Linux, so I have to learn some of the commands, and because the keyboard is so small, my fingers have not yet become accustomed to the cramped style. I'm sure that will change in time, though....

Here are a few pictures: 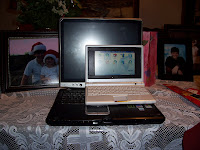 Pictured above is the EeePC sitting on my Toshiba tablet. See how small this puppy is? 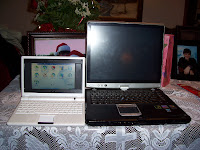 Pictured above are the EeePC and the tabletpc sitting side-by-side(I forgot to mention I bought the 4G version in Pearl White). 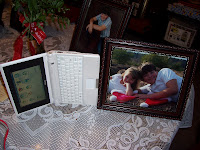 Pictured above is the EeePC sitting next to an 8x10 photo in a frame! Did I mention that this thing is SMALL? "That's S, M, all" (movie quote! Do you know the movie?)

BTW, the photos I took were brought into the EeePC through the SD card that goes in our camera. The system works so much like Windows, all I had to do was select the images I wanted, right-click Copy, surf to my photos folder and right-click Paste. Easy as pie! I'll be posting our picks and pans for the girls of Idol later tonight!