Super Tuesday not so super 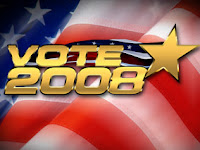 I voted yesterday (Tuesday). I am an Independent, but Arkansas is an 'open election' state, so I got to go and select the party from which I wanted to choose, and then I got to pick the person I wanted to vote for. I am a huge fan of electronic voting, and once they get Internet voting down, I am all for it.

When I saw the list of candidates, I was surprised to see that the list contained people who had dropped out (obviously "electronic" does mean "up-to-date"). And, it so happened the guy I wanted to vote for was still listed! Many people will say that voting for a candidate who dropped out is a waste of a vote. I disagree. And, so do at least 1999 other Akransans who also voted for the same person I did!

Let me make sure everyone understands this: I knew perfectly well that my choice had dropped out. I am not some bonehead that thought he was still running. I made the conscious decision to vote for the person I would have chosen had he not dropped out. Why?

I voted for him because I want him to know that he does have people who thought he was the better choice, especially given the alternatives. I admit, I also figured the news would show how many people voted for everyone on the ballot (which they did, and which is how I know at least 1999 others voted as I did). So, I figured that if they came on said, "Only 1 person voted for so-and-do..." I would know it was me. :-)

Now, what I want to know is how in the blankety-blank did ALABAMA, excuse me, AL-OBAMA, possibly vote for Barrack!? Hello!? This is ALABAMA we're talking about here! I am stumped, given the racial tension in that state... Then again, maybe there is no tension anymore...

Of course, that's no worse than Huckansas. But, you know why Arkansans voted for Huckabee, right? A vote for Huckabee is a vote that he gets the heck out of our state! Same pretty much holds true for Hillary, though on a less direct scale. You all realize that is why Bill won the state, right? We were so tired of his crap, we didn't care where he went, just so it wasn't here anymore! Though, I do have to admit, I ended liking what he did for the country politically. I believe he can truthfully says, "I did not have sexual relations with that country!" Unlike Bush, who has done us over so many times, it's no wonder the nation has the highest rate of colon-related problems ever.... 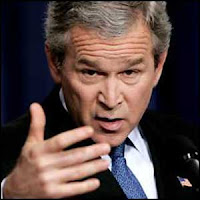 All I ask is that whoever wins in November, please, dear Lord, abolish "No Child Left Behind." Special Ed kids are Special Ed kids for a reason. On top of that, not all children are meant to be the next leaders of the free world, of the next phase of the industrial, information, or any other age. Some people are going to be garbagemen, mechanics, food service workers, etc. And what is wrong with that? Nothing. If it weren't for the bluest of blue-collar workers, white-collar guys like me wouldn't have the jobs we have to begin with. 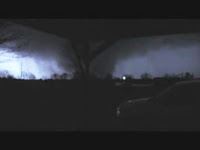 Tuesday brought not only the primary, but also the worst tornadoes we've seen in the state in quite a while. We watched the news as reports of Atkins and other towns were decimated. We watched as pictures and video flashed on the screen. We waited as the winds ripped through our area, bringing torrential downpours and small hail.

We live in Southwest Arkansas, so we were not as directly affected as the hardest-hit areas. Though not directly affected, we were and are certainly indirectly affected. I am on a listserv at work that joins almost every technology-related person in K12. All day, questions about the people we know (or know of), their friends, families, homes, schools, etc came pouring through the list. Since the first day I came to Arkansas, I have always said, "Arkansas is a small town." And it is times like these that it shows - people reaching out to those who are hundreds of miles away, as if they were their next-door neighbors.

I've lived in/near Pittsburgh, Denver, Boulder, and D.C. Arkansas is a small town, and there are very few places I'd rather live.
on February 06, 2008