A year ago today (Dec 2nd), I posted an article titled, "An adventure begins..." On this day last year, we took my Dad to the airport so he could fly to Houston before going to Kuwait and then on to Iraq.

Losing Dad has not been "easy" by any stretch of the imagination, but I cannot help but wonder how much harder it would have been, and how different things would have been, had it happened here. While he was away, as I wrote about before, he found a side of himself he had not known, and found a purpose in life he had missing. We are selfish and hate that he was taken from us before we could be with this "new" person he had become. But, I can't help but feel that he really did begin his adventure, and after all is said and done, I believe he reached his true destination, and that we will all see him again someday. 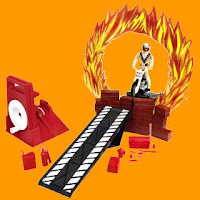 I grew up watching Evel Knievel, or I should say I remember watching him on television, anyway. Specifically, I remember staying up past my bedtime as a kid to watch him perform some jump. During the practice run, he took a bad spill, and could not perform the actual jump. I was heartbroken. I remember crying myself to sleep that night. It was not because he had been hurt, but because I was not going to be able to watch him jump live after begging my parents to stay up late. I know it was selfish, but I was maybe 9 or 10 years old.

I had a bunch of the toys that were part of his marketing campaign. But, the one I remember is the motorcycle that you had to push forward repeatedly to "rev up" and then you let it go flying.

Over the years, I would hear bits and pieces about Knievel, but on Friday night, we were eating at a local Mexican place, and ESPN was showing footage with the sad news scrolling across the bottom of the screen. He was the inspiration for many kids to become stuntmen for many, many years. He never gave up, even coming out of retirement to jump again.

As I read on another blog somewhere - "First it was Superman, now Evel Knievel... I'm getting older faster than I realized." The other night, I watched "Live Free or Die Hard." I am a HUGE Bruce Willis fan, and also love the Die Hard movies. I had not seen it before, so I did not know that the "Mac" guy in those commercials was in the movie until I was watching it. I spotted him instantly. The movie itself has flaws, sure, but it's DIE HARD, man!! Awesome fun! :-)

As I mentioned, all you have to do is wait and the weather will change in Arkansas. Today (Sunday), we had several hard rains while the temperature rose to 80 degrees. At 6:00 tonight, we went to church to watch the children's program. When we came out, the temperature had dropped to 58 and falling... It's a wonder the whole state does not live with perpetual pneumonia...

CONGRATULATIONS to Hines Ward!!! He is now the Steelers All-Time TD Receptions record-holder, surpassing John Stallworth's record of 63! That is very fitting that a guy like Ward would take over the record from a guy like Stallworth. Both stand players stand for integrity both on and off the field. Way to go Hines Ward!!