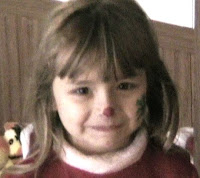 Emily had breakfast with Santa on Saturday, and this is what she looked like after she got home!

While she and Shan's Mom were with Santa, Shan and I were watching Tyler play basketball. I had recorded some of his on-court time during a previous game, but it was not on the tape with Emily (though I am pretty sure it should have been, hmmm). When I find Tyler's B-Ball pics, I'll post them... :-)

Despite some local weather folks predicting flurries for our area, we saw nothing of the sort. We got a lot of rain, and it was BUTT-COLD this weekend, but no snow. Of course, after seeing the mess in Pittsburgh, Oklahoma, and Cleveland, I'm not sure we WANTED any snow, thanks!

I did very well on my first foray into online card selling. I mean, I've sold (or tried selling) cards before, but this was the first time with a lot of "good" cards. My 98-cent experiment turned out to be a WHOLE lot of work. In fact, selling cards (or I guess anything in which you have 12000 items to choose from, scan in, etc) online period is a lot of work. Even though I took the "easy" way out and scanned in 9 cards at a time, listing over 360 cards is time consuming. The kicker is that if I want to sell the rest of these, I will have to keep it up. I'm not sure how much time and effort I feel like putting into this. I guess I will just have to wait and see, huh? :-)

As it turns out, I only sold ONE card with the $.05 starting price ($2.00 shipping). I sold more than 130 at the $.98/free shipping price. Of course, there were 140+ that went unsold period. So, the moral of that story may very well be the cards themselves do not have a market. The only real way to find that out is to list every single card I have and see what sells over time. Eventually, I may get to that point. Most of what I left, though, I think are commons or inserts that most collectors would have (I would think they would have them). Who knows! :-)

If this was my primary source of income, then I would be a lot more gung ho about it. Still, I may break the cards up into various sets and try selling them that way (sort into player groups, team groups, manufacturer groups, etc). 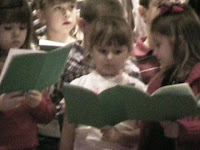 This is a picture of Emily at her Christmas program, singing along with her friends. Aren't they cuties? :-)

On Saturday, Shan and I did a LOT of Christmas shopping. We stopped to eat supper around 8:00 or so at the Texas Roadhouse. We had enough food left over for two complete meals, so we asked for a box to go. The box did NOT make it out of the restaurant. We did not realize until we were long gone that neither one of us actually picked up the box from the table! Ooops!

I will say that our waitress was awesome! The food was delivered with very good timing between "courses," and she kept our glasses filled throughout the meal.

We did some more shopping after we ate (yes, at 10:00 at night) before heading for home. You might think we got ALL of our shopping done. You'd be wrong. :-)