Well, the presentations at Hot Springs went better than expected. Of course, we had more people show up than I had ever expected. That's good, I suppose, but I can tell we are definitely going to have to polish our act if we are going to keep presenting about Share Point and the Distance Learning portal! :-)

Been back for a few days from Hot Springs. Friday, I hung out with Mom as she continues her recovery from the surgery. There are bandages to be changed, chores to be done (since she is not allowed to do them, and she better not until the doc says it's okay!). Saturday, I took Tyler to baseball practice. He did really well, though the whole All-Star team seems to have forgotten how to play as well as they did during the regular season. Rumor has it that the adults will play the kiddos later this week... Should be fun! :-)

While at Mom's, I decided to work a little on my baseball card collection. Well, while sorting through some cards, I noticed that the program indicated I did not have some of the cards I was looking through. I knew that wasn't right, because even with 4000+ cards, I have a tendency to remember certain cards/certain years. Turns out, everything I had entered for the year 1992 was no where to be found! AUGH! Further inspection revealed that CERTAIN cards from 1996 were no longer in the database either! What freaky little gremlins are responsible for this fiasco!?

So, the only thing I can do is go back through the binders and compare what cards I have in there with what the database says and re-enter the missing cards. Luckily, the binders still only contain the cards that were initially entered into the system. So, if they are in a binder, they are (or were or SHOULD be) in the computer... What a nightmare... It's a lot like Wal-Mart suddenly realizing they had stock on the shelves that was not being reported to their inventory system. Or, like you having deposit slips in your wallet but the bank saying you never made the deposits.... [sigh] Well, no rest for the weary...or the wicked, which is it? 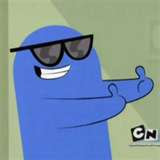 I'm a hot toe picker! Have you seen this cartoon? "It's HOT in To-peee-ka!" The kids have been walking around for weeks saying "It's HHHHot in TOOOOO-PEEE-Ka..." And, of course, it is cute and annoying at the same time, so I asked about it. Turns out it was a bit from "Foster's Home...." on Cartoon Network. It is one of the funniest things I have seen! So, now we (well, the kids and I anyway) go around saying, "I'm a hot toe picker!" It even made it onto billboards around the country! (See below) I love America! :-)

Oh, before I forget, I finally took a picture of the plaque on my Mom's deck: 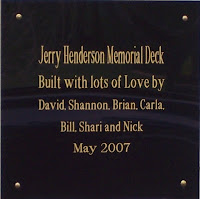 Been watching the news lately: