Yesterday (Friday) was Tyler's first All-Star baseball game this season. We were down 1-5 in the 2nd (or maybe 3rd) inning. Then, we were down 2-6. We rallied back and were ahead 10-6 in the 6th inning (the last inning of regulation)!! Unfortunately, the other team loaded the bases and... Smacked one out of the park for a grand slam... 10-10 going into the 7th inning. Oh, I should let you know that we would have been ahead by one more, but one of our runs was disallowed because one of our players (who was a forced runner) slid head-first into the plate. A big no-no in Little League (though it LOOKED awesome!). Anyway, we tried to rally, but no doing. Two outs in the bottom of the 7th, and the other team scores the winning run.... It was a tough loos, but it was a lot of fun! As soon as I get pictures transferred from video to stills, I'll post some... :-)

Now, for the sharing part.... For the sake of posterity, or because I think I should share my self-inflicted baseline-burn with the world, I offer up the following picture (taken Friday night after a good cleaning): 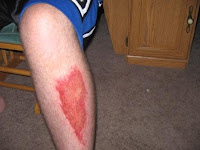 Still more to post, but I'll do that later tonight... Mom is supposed to be released today! YAY! And Tyler has another game! Going to be a busy day around the old homestead.... Though, I think Shan gets the award for "sticking it out" for yesterday... Between trying to find the sports supply shop (which, it turns out, is located in the middle of a NURSERY! Who thinks, "Hey! I need a tree...and a helmet..."??), fighting the lawn mower, dealing with her limp-along husband, a four-year old, sewing patches on a baseball uniform, and many other things all in one day, she pulled it all together... As the songs says, "And I thought I was tough......"